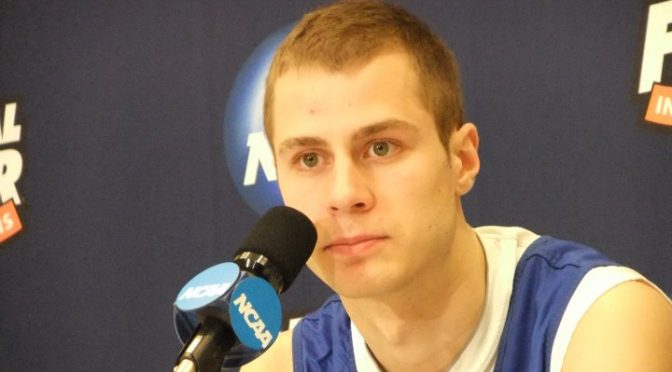 As the news broke this morning that Mike Krzyzewski would retire at the end of the coming season, it knocked the fanbase back. But Duke already knew who would take over in associate head coach Jon Scheyer.

The 33-year-old Scheyer was twice named captain while at Duke and in 2010 helped lead the Blue Devils to their fourth at the time national championship.

During that season, Krzyzewski tapped Scheyer as the PG and after a tumultuous offseason that saw Elliot Williams transfer and Harrison Barnes turn Duke away in an awkward Skype scene. Scheyer and his coach had the last laugh as they hoisted the trophy in the end after a special run where they defeated Butler.

Scheyer would go on to his dream of continuing basketball before an unfortunate eye injury ended his young professional career. That opened the door for his return to Duke in 2013 and in 2022 he will take over the reins from his mentor and legend.

For those who may not see his contributions on television or live, Scheyer is always right beside Krzyzewski and in his ear. He has blossomed into a great recruiter where he is known as being a straight shooter.

The move to name Scheyer the coach in waiting was passed by the Duke Board of Trustees. And he is the logical pick for a smooth transition and staying within the family.

Scheyer has already been working prospects as the dead period recently ended. He will now carry a new message that will ring similar to the same tone past in that Duke offers exposure even as the legend, Mike Krzyzewski steps away.

The head coach to be has worked with a lot of Duke players in the past. You see many things from press row, some of which may be deemed private, but it involved keeping the guys together and focussed. He has already handled some awkward situations when emotion flared, etc.

Scheyer is also liked by pretty much everyone who has had interactions with him. He is polite, professional, humble and wants to succeed. And you can bet he has already tried to make sure his close friend and national championship teammate Nolan Smith will stick around.

I have never been one to discuss Krzyzewski's replacement. But the choice made is a solid one that will allow continuity as the #brotherhood lives on.

We have yet to hear a lot of details from the news that rocked the sports world, but we are likely to get more comments by week's end. Scheyer remains 10th on Duke's all-time scoring list as a player.

Anyone who pondered this day when Krzyzewski moved on knew his successor would have their work cut out in following the winningest coach in history. Scheyer may have given coach the confidence someone can keep it all going and he knew it was his time.

Right now, the Blue Devil Nation is saddened by the news on the man known as Coach K. But the fanbase is also excited for Jon Scheyer to get his shot. Needless to say, we will have a memorable season coming in so many ways.

Scheyer once scored 21 points in a high school game in just 75 seconds to lead his team to a comeback win.

He played in 144 consecutive games while at Duke which is still a record.

He still holds the record for most minutes played in a season at Duke.

I covered Jon Scheyer on the recruiting trail, as a player and hopefully as a coach. Stay tuned for much more this season from Blue Devil Nation.