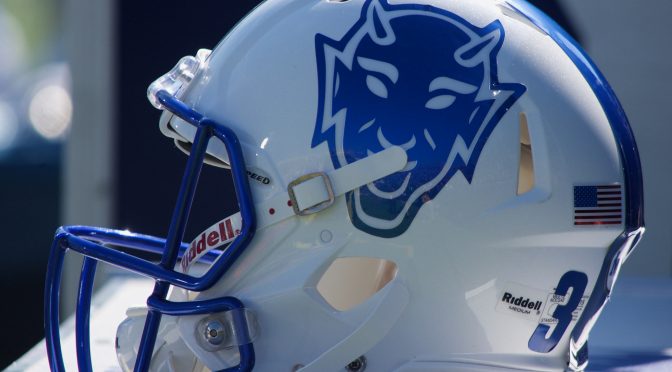 Let's face it. Last week's start to the football season was a disaster for Duke which went to Charlotte for an expected win and came home with a sobering loss. It is not the start that a cash-strapped program with seven home games on the upcoming schedule could afford. Coming off a disturbing upset loss Duke is looking to rebound against another suddenly dangerous opponent in North Carolina A & T.

In other seasons the Aggies would be considered a win and are scheduled to be such. But this year the Duke football team looks especially fragile early on and if they cannot find a victory this weekend, they may not find one at all against an increasingly difficult schedule.

Taking the pulse of the fanbase it is clear that many feel this could be the last season David Cutcliffe hawks the sidelines in Durham. That is not something in which I take pleasure in saying for he brought bowl games to Duke and turned the program around.

I stated late last year that there had been a slow leak in the program of late and the start of this season reaffirms that there has been a drop-off in recruiting, player development, and finding the right coaches who fit each position.

Before I go further, Cutcliffe and Duke can flip the script with what many consider winnable games against the Aggies, Kansas, and Northwestern all at home. In fact, the future of Duke football rides on these three contests in my humble opinion.

Should the Blue Devils look awful in these games and win one or less of the contests, I think the writing is on the wall for an impending change. And Duke would be better served getting a search going.

New Duke Athletic Director Nina King will almost assuredly be making a move unless the team shows immediate life and some form of stability.

As of yet, the program seems ill-prepared for the coming NIL or new era of football. There has quite simply been noticeable regression. In fact, the only reason Duke did not hit the infamous ESPN Bottom 10 this week is that they ranked the ACC on the whole at number four.

You will not find too many people in the media that does not respect and like Coach David Cutcliffe. He has earned his respect but he is losing what he built of late and that quite simply means the much-dreaded sentence. Duke is once again rebuilding.

The Blue Devils cannot allow another chance of a rare victory in a season when the roster is young and depleted to slip by. One must keep in mind Duke lost star staters to other schools in the offseason from a 2-9 team, so expectations were low, to begin with.

Duke has been labeled a 21 point favorite over the Aggies who are coming off a loss to Furman. But beware, A & T has immense pride and they have a storied history. It was not long ago they shocked East Carolina on the road and yes, if the cards fall right, they can beat Duke.

The Blue Devils should win this game. They must win this game if Cutcliffe is to right the ship. And yes, this is an absolute must-win.

I have not studied the Aggies as I did the 49ers a week ago. I hinted in that preview Duke could lose that game and it surely happened in a shocking, disappointing style that left many embarrassed.

The reason for that is that the program is a bit fragile at this time where they are getting little separation from starters to subs in some cases. They need an influx of talent or to develop some kids better going forward.

If by the end of this evening we do not have some new names to talk about making plays at Duke, the pressure only increases.

It is hard to pick against a 21 point favorite in Duke at home. They are or should be desperate. They should go all out in this game. And they should be able to win against their level of competition if they are to play like an ACC school. But Duke is now at the bottom of a down ACC in football.

The question nobody asked David Cutcliffe this week is how the program got to this point. What are the reasons and can they be corrected? Right now, most people are starting to think this might be the end of an era simply from the inability to maintain a modicum of success in the much-important wins department.

I personally hope Cutcliffe can find the answers needed. But I do not see the foundation for that at this time. And I am not sure if the answer to the future is within the program. He is the man in charge and he makes good money to do so in an acceptable way. So, it is on Cutliffe how this all turns out.

So, yeah, the next three contests in my opinion will be the final tell-tale. I would like to think the players and staff will respond but only time will tell.

**There are plenty of good seats available to tonight's 8:00 game which unveils new concessions, alcohol, and other changes. Masks are required in Wallace Wade Stadium.