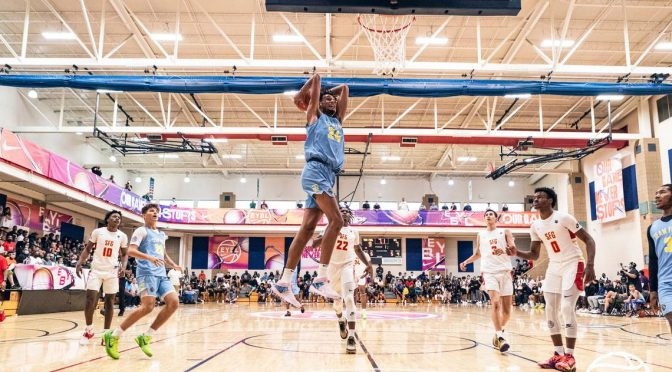 The Duke Blue Devils land the nation's top big man when 7 footer Dereck Lively announced that he will ball in Cameron Indoor Stadium next season.

Lively is the real deal and a player who soared up the rankings after showing off top-end improvement over the spring and summer.

The budding star played for Team Final in the Nike EYBL summer league and that organization has produced a lot of top-end prospects over the years.

Duke coach to be, Jon Scheyer and his staff of former Duke teammate Nolan Smith and Chris Carrawell quickly made Lively II an immediate priority when it was learned Mike Krzyzewski would be in his last season in Durham.

The addition of Lively gives Duke a solid four-man class to date. He will join SF, Dariq Whitehead, PF Kyle Filipowski and SG Jaden Schutt in a class that is still forming. It is worth noting that the Blue Devils have

The newest Duke verbal commitment is a possible game-changer on the defensive end where he is tall, long and agile with quick hops. His upside is on the offensive end where he has been working on stretching the court with newly found three-point range.

The Bellefonte, PA. native has a unique skill set that will be attractive to NBA teams where he will in time be a lottery pick. The one thing he will likely have to do is work on adding weight but he is already a force on the blocks where he plays above the rim. The weight he does have is lean muscle, so expect the young man to fill out his frame with natural maturity.

Lively spurned Kentucky and Penn State to play for the Blue Devils.