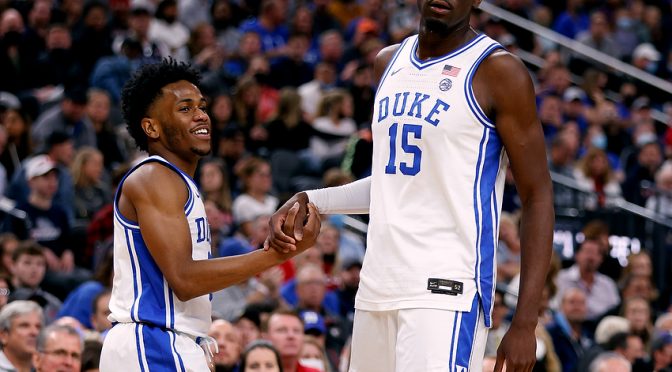 Opening statement:
“It was just a really big-time game. What a great crowd. I want to thank T-Mobile and the people who’ve helped put the game on. We planned
this well over a year ago. We thought it might be a showcase game, and it was. But having this type of crowd was amazing. Obviously, we feel
great about the win. We think we beat an outstanding basketball team. Mark [Few] and I are very close friends and their team advances the
ball, pushes it up the court, faster than any team we’ve competed against for a long time – I can’t even remember. So, it put a lot of pressure
on us. Then we advanced the ball too. We had a lot of adversity with Paolo [Banchero] getting cramps and he had to get an IV. I thought Mark
[Williams] had a sensational game, but the leadership of my captain [Wendell Moore Jr.] was, I think, the key to the game. Wendell Moore was
absolutely spectacular and his leadership, especially at the timeout when they took the lead and we had turned the ball over, the things he
said and his demeanor and what he said to his team – he really led us to a victory. It was really a player’s game.”

On freshman Paolo Banchero returning in the second half after dealing with leg cramps:
“Just having him there helps with his teammates. Not only that, they’re concerned about him. These guys give each other strength. He’s not
giving us strength in the locker room. Even if he couldn’t play as much, he gave us a lot of strength.”

On junior Wendell Moore Jr., speaking to the team during a timeout:
“Sometimes when a leader says stuff, he doesn’t remember what he said. I remember what he said. He said, ‘Be strong with the ball. Let’s get
going. We can’t be giving up layups.’ He was saying the things I should’ve been saying, but when it comes from a player, it’s better. Especially
that moment – that was a critical moment. I’ve been in a lot of games. We could’ve gotten knocked out right there, and what that kid did at that
timeout was big time. It was really big time.”

On the atmosphere of the game:
“These kids are going to be playing in front of a lot of big time crowds during their lives, during their careers. We’re fortunate that in our
program, we’re able to schedule some games that can produce a high level of attendance, and same thing with Gonzaga. When we had an
opportunity to talk about this game, Mark [Few] and I wanted to play this game. It’s a showcase game. They have an amazing program and so
do we, so it’ll attract a lot of attention. It’s probably the game of the year so far. We all realized it. Las Vegas has really become an amazing
basketball town. Obviously, with Tark [Jerry Tarkanian] with UNLV, but with all the tournaments being run here – I wish they’d still bring those
AAU tournaments back at the end of July. Las Vegas is a huge sports town, so we wanted to play the game here. We played the first collegiate
game here (at T-Mobile Arena) a few years ago, so we wanted to come back.”

On sophomore Mark Williams’ development since last season:
“The COVID year hurt all those kids because they didn’t have a summer and a fall of individual preparation before their season. Mark came on
during the last month of the season. He had 23 [points] and 19 [rebounds] against Louisville, and then we got COVID. He’s just continued to
build on that. I really believe that Theo John has helped him, and he helped us today too with those two buckets when Paolo [Banchero] was
out. Theo is the best teammate and he’s tough. He started at Marquette, and for them to be able to play and work together, he’s playing
against a high-level talent every day. Theo talks to him during the game, and it’s helped him. Because we play fast, Mark, his stride – how he
runs, how he runs – has changed. Instead of a walk-up offense, we run. That’s good for him. He’s going to keep getting better. Again, he and
Chet [Holmgren] – it’s tough to get a shot off close to the bucket.”
On junior Wendell Moore Jr.’s growth as a player and leader:
“If you try to look at only one way of becoming successful, a lot of people are never going to be successful. You have to find your way, and
accept coaching, accept guidance. Wendell – he was only 18 [when he arrived at Duke]. Two of our kids, Trevor [Keels] and AJ [Griffin] are 18.
They’re not 20, they’re 18. Wendell is 20. He spent seven weeks this April and May changing how he ran, how he walked. He busted his butt with
our medical people. He’s an inch taller, he’s a better athlete, his force and how he runs has changed and he took a look at himself and said,
‘These are the things [I need to improve on], how I walk, how I run,’ and it’s worked out. But you have to be open to that, and then you have to
work. He's worked really hard. That kid is really having a hell of a year. He’s my captain. I love what my guys did. I love my team. They’re really together.