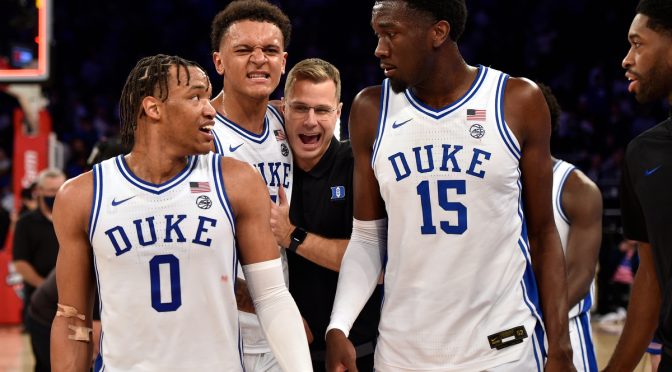 The Duke Blue Devils opened the season on a positive note with a rousing 79-71 win over Kentucky. If I told you before the game Duke would hit a single three-pointer and have just 7 assists as a team you would have thought they lost. That is why we take a closer look at the stat sheet.

Trevor Keels scored the first Duke basket of the season and he ended the game with a game-high 25 points and a 3 team high in steals. The powerfully built guard is a matchup nightmare.

Even cramps could not slow down the debut of Paolo Banchero. Despite some aggravation, he tallied 22 points on 7 of 11 shooting and 8 of 9 free throws. He is the real deal!

Wendell Moore was rock solid with an efficient 12 points, 3 assists. He played older.

We know who Duke's enforcer is! Theo John. The veteran had 5 points, 2 rebounds, 2 blocks, 3 hard fouls and some intimidating looks.

Mark Williams did not score a lot earning 7 points but he was crucial to the win with 7 rebounds, 3 blocked shots and 2 steals. It was hard to go big a lot in this game due to matchup issues, so his numbers will only rise against bigger teams.

The play of Keels makes Jeremy Roach better and vice versa. He quietly had 7 rebounds and 2 steals playing off his former teammate in high school.

AJ Griffin is working back into game shape after battling injuries. He will only get better. I thought he had some good moments with a forced turnover and quick bucket spelling the cramped up Banchero.

Mike Krzyzewski has gone 34-11 at Madison Square Garden winning his last game there over Kentucky.

This was Duke's ninth win in its last 11 meetings with Kentucky. Coach K is 7-2 versus the Wildcats.