DURHAM - BDN caught up to Elton Brand during the Coach K Academy and got his thoughts on his return to Duke and his future with the Philadelphia Sixers [76'ers].  We had a one on one interview save a few questions from folks who interrupted the conversation mid stream.  We'll be talking more with Brand in the coming months, so look for an extended interview down the road.  Please forgive the background noise in the audio tape and we'll be returning to print with the interviews in the future.  Next up - One on one with Chris Collins

It's always good to see former Duke All American Bobby Hurley for he brings back nothing but great memories from his playing days at Duke University.  Hurley remains the NCAA's All Time Assist leader to this day and he of course quarterbacked Duke to back to back national championships in 1991 and 1992 and participated three final fours and three national championship games.

His roots at basketball crazy St. Anthony's in New Jersey are worn on his sleeve where he is quick to talk about his Dad Bob and his brother, Danny.  Hurley was a first team All American as a senior in 1993 and was named to numerous AA teams during his successful career.  He still holds the Blue Devils single game assist record and his jersey number 11 hangs in the rafters of Cameron Indoor Stadium.

It's worth noting that Hurley was named the Final Four MVP in 92 and that he was the 7th pick in the NBA draft by the Sacramento Kings.  Hurley's pro career was cut short after a car hit his automobile after a Kings practice.  Hurley's knee injury kept him from doing the things he is accustomed  to on the court and his fabulous career on the court came to an end shortly thereafter.

Hurley know lives in Florida where he enjoys raising his sons and partaking in horse racing.  The following audio interview was conducted by Brian Strickland of the Herald Sun and myself with a few other questions from others towards the end.  We hope you enjoy hearing from this ACC legend as much as we did during our chat.  For more interviews with former players and Duke basketball prospects, join our subscription service Blue Devil Nation Premium. 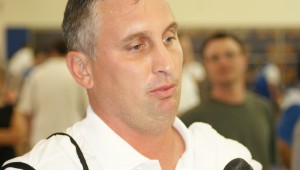 I had the opportunity to speak with former Duke All American and College Player of the Year Jason Williams yesterday afternoon.  Jason is participating as a coach in the annual Coach K Academy where he'll test his x's and o's skills against former Duke Basketball greats.

We are making this interview available to give you an idea of the audio you'll find in Blue Devil Nation Premium featuring current, former players and prospects.  Jason talked of the event, broadcasting and much more.

So, sit back and enjoy the latest from Jason Williams on BDN audio.  Also, be sure to listen to what Coach K had to say in our previous feature.

Coach Mike Krzyzewski addressed the media this afternoon during the opening day of the Coach K Academy.  The event features a chance for men thirty-five years of age and older to participate in a fantasy camp which oozes with the Duke environment.  We'll have a bit more on the camp later, but for now, enjoy this audio Q & A session with Krzyzewski.  BDN Premium members will get to hear several interviews with former players in the coming days.