Day one of our Adidas Nations coverage is underway where BDN's Andrew Slater is on the scene bringing constant updates as they happen to our premium members.  Duke Coach Mike Krzyzewski and Chris Collins are in the house where they are watching several prospects.  One of those is Shabazz Muhammad who just dropped 32 points.  Alex Murphy?  He just dunked a ball to tie his team's game up at 74 all with three seconds left on the game clock.

Find out who the Duke staff is watching and how Duke's hot  prospects are doing by becoming a subscriber to the most active Duke site on the AAU circuit, Blue Devil Nation Premium.  Andrew has already listed some of the measurements for key recruits at the LeBron Skills Academy in Akron as well.  And he will continue to cover both events as the week progresses.

He has already talked with Marshall Plumlee, Shabazz Muhammad, Kaleb Tarczewski and Troy Murphy, so interviews are coming.  So if you want to hear about the throng of the nation's finest coaches are watching or the circus atmosphere surrounding LeBron James, check out our trial offer which lasts just a few more days or join for the year which is the best bargain.  It's a great time to be a member of BDN Premium.

As soon as you are done, join our private message board where you can find updates like these as they happen -

Drew, Crean, Dixon, Huggins, Capel, Miller, Self, and plenty of assistants. NE Playaz won convincingly, 68-50. The only one who was consistently able to score for D-One was Deuce. Bello finished with 26. Quincy couldn't defend Tarczewski and Clifton kept telling their replacement coach to pull him off of him- Adding that it was Quincy and four midgets. Miller finished with 5points, which is, by far, the least I've ever seen with him. Murphy, displaying his high bb IQ and improved athleticism and strength, and Tarczewski really closed out well in the second half. Alex Murphy finished with 18 and Kaleb Tarczewski finished with a team-high 19. K and Collins are watching DC Assault take on Franchize All-Stars.

The Blue Devil Nation was on hand for the 7th Annual Martin Luther King Scholastic invitational in Greensboro and we bring our members this synopsis of the happenings.  We'll have Q & A's with the shakers coming as well.  From Deuce Bello to Mason Plumlee, we bring you the latest -

Why did Oak Hill win so easily? -Guard play, namely Mo-Mo Jones who drove it right down the throat of the Greenies defense at will.  Oklahoma bound Tiny Gallon made some timely blocks and held down the middle.  Daron Lamb ran as a front court player in what was basically a three guard

offense.  Oak Hill scored a ton of points where the Greenies didn't [private] get back on defense.  Then there was a lack of patience when the game was close for Christ School, that allowed spurts that ultimately became too much to come back from.  Greenies lack of a special point guard ws exposed and their guards neutralized.

More Keith "Tiny" Gallon- While he wasn't that effective on the offensive end, his play was vital.  He turned to the Oklahoma assistant and nodded with a smile after taking the ball in for a dunk over two players.  Later in the game he said "I'll bet yalls money was on them," to the TV crew from Western North Carolina which was covering the game.  He did so laughing.  Too much moxy for Oak Hill. 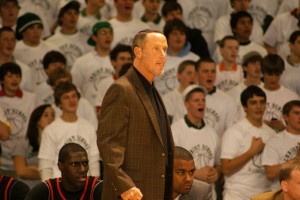 a comment, "Brandon Jennings is gone," taking it as if that meant he'd be handled with ease.  We will provide quotes from many of the players in a game article that is in the works.

Short turnaround - Christ School is in High Point for a game today.

Greenie support - Christ School support was impressive and at times funny as their student body sat directly behind the Oak Hill bench.

Mason Plumlee- Plumlee had 24 points but struggled from the three point stripe.  The lack of three point shooters helped doom Christ School in their comeback effort and Mason was trying to put his team on his back.  This caused him to force a few shots and late in the game the calls were not going his way.  It was not one of Plumlees better games despite his MVP for his team, but he 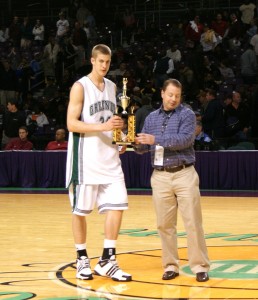 was by far one of the only players on a talented team to show up.  He was helped by Lucas Troutman, a junior who had a nice game around the boards.  His brother, Marshall played sparingly.

Overheard - Assistant from Wake telling a players Father, you know I cannot speak to him talking of an Oak Hill player.

Most watched prospect- Deuce Bello, a sophomore from Westchester Country Day.  You'll be hearing a lot more about this prospect.  It may be worth noting that Nate James stayed for his entire game in the nightcap.

More on Deuce- He stands 6-3 and has blazing speed in making his moves like slashing through the lane.  He is a quick leaper and a showboat dunker.  He is very fast with the ball off the dribble and

has a solid handle.  His defense needs work as does his outside shot.  He looks like a top ten player in the class of 2011.  He handled PG for his team, but will fit more as a wing guard in college.  I was able to watch a DVD of another game he wasx in and will break him down shortly.  I look forward to seeing him again. [/private]