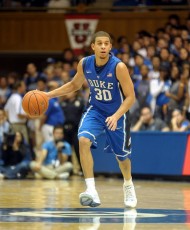 The N.C. Pro Am continued on the campus of N.C. Central University last evening and that means summer hoops action as players from Duke, North Carolina and N.C. State take to the court.  Seth Curry scored 17 points helping lead his team to a win and BDN caught up to him after the contest -

There is a buzz around the N.C. Pro Am which involves the play of incoming freshman Kyrie Irving.  Ever the competitor, Irving relishs the opportunity to go up against any and all comers.  After committing two early turnovers in his most recent game, Irving settled in and dropped 33 points.  The New Jersey native wowed the crowd with his ball handling ability and he blew by pretty much everybody who tried to guard him in his last outing.  BDN teamed with the News and Observer's Ken Tysiac to get Irving's thoughts on many issues which you can hear via BDN Audio.

Note -You will need to adjust your volume for there are some technical issues with the recording which we could not resolve, meaning it is loud and more distorted than we like but it is still worth a listen.