NEWARK, N.J. - Duke's Austin Rivers was selected with the No. 10 overall pick in the first round by the New Orleans Hornets in Thursday's NBA Draft, while Miles Plumlee was taken with the No. 26 selection by the Indiana Pacers. Duke has now had two first round picks in each of the last two years and six times overall.

Rivers, who entered the draft following his freshman season at Duke, is the 17th Duke player selected in the NBA Draft Lottery, more than any other school in the nation since the system was put into place in 1985.

"I love New Orleans more than anything in my life right now," Rivers said to a group of reporters after being selected on Thursday. "Coach Monty Williams is a great coach. Anthony's coming. They have a great city. I'm looking forward to going there and working hard and helping out in the community and doing everything I can to help this organization win."

Rivers, a 6-4 guard from Winter Park, Fla., averaged a team-high 15.5 points per game to join Johnny Dawkins (1983) and Bill Sapp (1945) as the only players to lead the Blue Devils in scoring as freshmen. He scored in double-figures 30 times, with eight games with 20 or more points scored. He also averaged 3.4 rebounds, while finishing second on the team in assists (71) and steals (33) and third in three-point field goals (58).

He had his best scoring performances of the year on the biggest stage on Feb. 8 at North Carolina. Rivers posted a season-high 29 points and nailed a three-point field goal at the buzzer to give the Blue Devils an 85-84 win over the fifth-ranked Tar Heels. He went 9-of-16 from the field, including 6-of-10 from three-point range, and added five rebounds in the victory.

Rivers, the 2012 ACC Rookie of the Year, joined Corey Maggette (1999), Luol Deng (2004) and Kyrie Irving (2011) as Blue Devil freshmen to enter the NBA Draft after just one year of college basketball. The three previous freshmen early entrees were each selected among the first 13 players in their respective drafts, including Irving, who was the No. 1 overall pick in the 2011 NBA Draft.

Plumlee closed his four-year career at Duke with 650 points and 654 rebounds, while shooting 55.6 percent (262-of-471) from the field. He helped Duke to the 2010 NCAA Championship, three ACC Tournament titles and a 115-20 record during his four seasons in Durham. 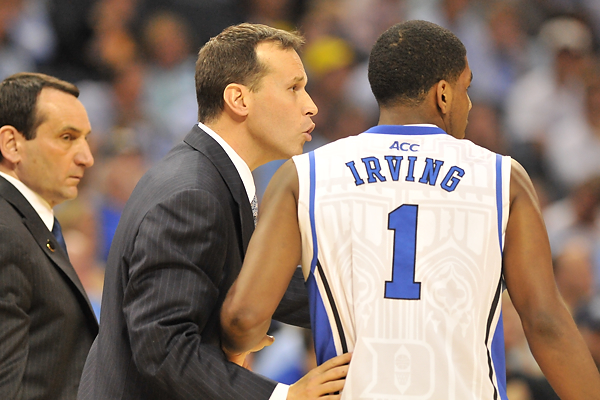 Duke freshman guard Kyrie Irving will enter the 2011 NBA Draft with plans to hire an agent, head coach Mike Krzyzewski announced Wednesday. The 2011 NBA Draft will be held on June 23 in New York City and Irving is expected to be among the top picks in the draft.

“Our whole program is overjoyed with having Kyrie here for one year and that he has the chance now to pursue a dream of being a high draft pick and a great player in the NBA,” said Krzyzewski. “We are totally supportive of Kyrie, his family and his decision. We look forward to continuing to work with him during the upcoming months leading to his entry into the NBA and afterwards while he is an NBA player. He is a great young man, a terrific student, and a truly amazing representative for our program and for Duke. We love him and are very happy for him and his family.”

“I want to thank the entire staff at Duke, especially the coaches,” said Irving. “It was a great experience playing for Coach K. He taught me a lot about the game. Even when I was hurt, I learned a lot. Also a special thanks goes to the medical staff for getting me back on the court for the NCAA Tournament and my teammates for sticking with me throughout the entire year. Duke offered me an experience I could never have imagined.”

He scored a game-high 31 points to go with six rebounds, four assists, two blocks and two steals against No. 6 Michigan State in the ACC/Big Ten Challenge. It was just the fourth time in school history a freshman scored 30 or more in a game. He was selected the CBE Classic MVP after averaging 14.5 points, 4.0 rebounds, 6.0 assists and 1.5 steals in the four games. He had 17 points, five rebounds, six assists and two steals in the finals against No. 4 Kansas State. Irving also dished out nine assists against both Princeton and Colgate. In the NCAA Tournament, he scored team highs of 14 points against Hampton and 28 points against Arizona in the Sweet 16.