[private]The Blue Devil Nation was once again on the scene for today's practice where Coach Cutcliffe took the time to give us a synopsis of the practice. 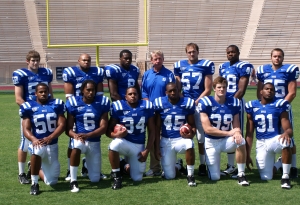 Coach Cutcliffe on today's practice- We had our second day in a row of physical practice in preparation for James Madison. I think we are on pace. We'll pick back up next week. Tomorrow we'll have a workout that's dedicated to the kicking game ... all phases and aspects. So we will cover every situation. I don't like putting a team out on a field when they haven't been put through every situation that can arise in a ball game. Coach Middleton and I met kind of late last night and developed a nice script. So we will add some strong meeting time and get that worked out. We'll do some heavy physical conditioning in the morning and we'll be ready to start game week on Sunday.

On the defense- I think there is a significant difference in our linebacker play because of our speed. Vinnie and Mike have totally different body types than they had a year ago. I think Coach Hobby has the defensive line playing really hard. I'm concerned about our depth there. Charlie Hatcher has put himself in a position to really help inside. Ayanga and Egboh are showing progress outside. I'm real pleased with the secondary. The consistency has been good, the tackling has been good. They're liking the tighter coverage ... the press coverage. There getting use to it now, it's fun to watch it work. I'm pleased, but the biggest concern I have with this football team is injuries. Knock on wood, we've been relatively injury free on defense and we need to stay that way.[/private] 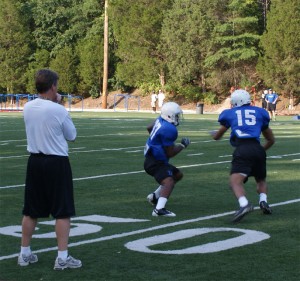 Coach Cutcliffe sang the praise of the number one offensive line unit on Wednesday evening.  “It was good to put the pads on where we could get some work on the line of scrimmages with the offensive line against the defensive line.  It really starts telling the tale of who is ready to play,” said Coach Cutcliffe.  He continued, “I was encouraged by the offensive lin in our inside running drills today.  It was the best I’ve seen them play since spring.”

“Get up, get up, get up!,” echoed in the background from various parts of the field as dusk closed in on Duke Football’s third practice of the season.  In short, when a player hit the turf, they we immediately encouraged to get up so that they could still make the play.  “One of our rules is to treat the ground like a hot stove.  Nobody has ever won a football game laying on the ground.  I think it’s critical that our guys understand.  That’s how we play football, we’re back on our feet.  That’s the biggest emphasis we have right now, that everybody get back on their feet, stay on their feet and keep moving.  There is an old saying I like from the years I heard from old Jim Neyland, “No feet, defeat,” and I think that’s very true in football.  If you don’t have good feet you’re gonna get beat.” 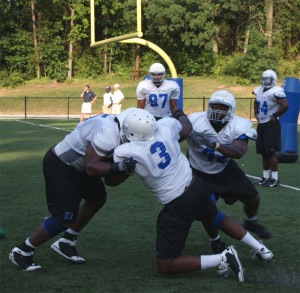 With regards to the passing game, Cutcliffe stated, “We have miles to go, but we are making a lot of progress in throwing and catching the ball route running and understanding spacing versus zone and separation versus man.”  Coach then said that they had slowed the process down and got back into the teaching mode saying,  “We don’t want the cart to get ahead of the horse trying to do too much.”  This was in reference to similar mistakes this unit had been making in Spring ball which once again caught his watchful eye.  He also mentioned that the receivers were starting to learn how to separate and that the quarterbacks were starting to play a little faster saying, “It’s a fast mans game and we’ve got to get to that point.” 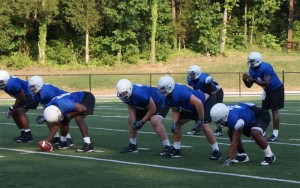 While a lot of the focus has been on the offense, it’s defense that often wins you the ball game.  “I see our defense managing our zone blitz game and disguises.  You can tell they’ve done a lot of group and individual work on it,” said Cutcliffe.

Notes- Much like Coach K, Cutcliffe is active when talking about changes he feel will help the college game.  He feels there should be some sort of exhibition game in order to work out the kinks, stating the NFL got four games to work with.  He also talked of some rule changes which I will elaborate on later.  A couple of freshman caught my eye and it is being discussed on the BDN Premium Message Board.  Tielor Robinson is running with the tight ends.  There is no word on the status of Brandon King.  Coach Cutcliffe will be speaking at Tyler’s Tap House in Durham tomorrow with tickets still available.[/private]