BDN sat down with Duke quarterback Thaddeus Lewis this afternoon and got his thoughts on the upcoming contest with Virginia.  Hear his thoughts for yourself by clicking play below -

DURHAM, N.C.  - The Duke Blue Devils rode the arm of Thaddeus Lewis to defeat the Maryland Terrapin's 17-13 in soggy and wet Wallace Wade Stadium.  The win pushed Duke's record to 2-1 in the ACC and 4-3 overall.

The Devils have now won two consecutive ACC games for the first time since 1994 when they won four in a row.  Lewis hit 30 of 43 for 371 yards, two touchdowns and one interception.

Lewis was aided by big games from wideouts Donavan Varner [8 catches 120 yards, one touchdown] and Conner Vernon [5 catches for 102 yards] and Austin Kelly [9 catches for 61 yards].  The other passing touchdown went to tight end Danny Parker.

His point was that Duke had a season high 12 penalties for 101 yards and two fumbles in the red zone.  Despite that, Duke was able to hang on for a key ACC victory.

The Blue Devils next travel to Virginia in a game which starts at 3:30 on ESPN 360.  More football coverage to come. 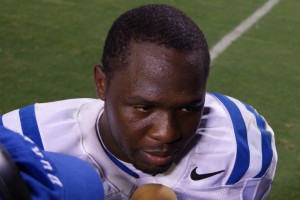 DURHAM, N.C.- Thaddeus Lewis sat down with the media today and BDN was there to fire off several questions.  The Blue Devils are going for their second consecutive victory this Saturday when Maryland visits Wallace Wade Stadium this Saturday at 1:30.  Good tickets are still available at GoDuke.com.  Turn out and support Duke Football.

Lewis has led Duke to a 3-3 record on the season. He ranks second in the ACC and 17th nationally with 266.8 passing yards per game. He has completed 134-of-213 (.629) pass attempts for 1,601 yards. He has thrown 12 touchdown passes while throwing just two interceptions. He also has three rushing touchdowns to lead the team.

In two conference games, he is averaging a league-best 409.0 yards per game. He completed 40-of-50 pass attempts for 459 yards and five touchdowns in a 49-28 win at N.C. State. His performance earned him National Offensive Player of the Week honors from the Walter Camp Foundation as well as ACC Player of the Week and Davey O’Brien National Quarterback of the Week. He also threw for 359 yards and two touchdowns against No. 6 Virginia Tech.

The 2009 winner will be presented with the Johnny Unitas Golden Arm Award on Friday, December 11 at the Tremont Grand Meeting & Banquet Facility in downtown Baltimore. Joining the festivities that evening will be a number of former Baltimore Colts teammates of Johnny Unitas, along with NFL Hall of Fame quarterback Bart Starr. 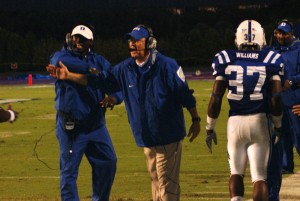 The 2009 college football season is at its halfway point, and Duke is sitting at 3-3 (1-1 ACC) with impressive wins over Army, NCCU, and N.C. State. In their most recent game, the Blue Devils traveled to Carter-Finley Stadium and defeated the Wolfpack by dominating the second half of the game. Thaddeus Lewis threw for a career high 459 yards and five touchdowns as Duke earned a huge victory to even their season record at 3-3. Coach David Cutcliffe stated, “I believe that is the finest game that I’ve had a quarterback have in college.” That is high praise coming from a coach who has previously coached Peyton and Eli Manning in college. Lewis was named the Walter Camp Foundation’s National Offensive Player of the Week and the ACC Offensive Back of the Week.

Looking forward to the second half of the season, here are four questions burning in the minds of Duke Fans around the World:

1. Can Duke build off the N.C. State victory and finish with a winning record in 2009?

With Duke’s bye week coming at the season’s midpoint, it is like having two six game seasons. Having achieved a .500 winning percentage over the first season, Duke Fans are looking to the team to improve during the second season. The competition will be tough as all six games will be against ACC opponents.

Based on the team’s performance against Virginia Tech, Duke has proven they can compete with every team in the ACC. The games against Miami and Georgia Tech should be the biggest challenges, but the Blue Devils are favored over Maryland, and should be favored to win the game against Virginia, with the Wake Forest and North Carolina games being toss ups. The odds are actually irrelevant as illustrated by Duke’s 21 point defeat of the heavily favored Wolfpack. If Duke plays inspired football, over the next six games, they are definitely capable of winning a majority of their remaining games.

How the team finishes this season is an important next step in the rebuilding of Duke Football. Last season, Duke was 4-3 after traveling to Nashville and defeating Vanderbilt, 10-7, in a thriller. However, the Blue Devils dropped five straight games to finish the season at 4-8. The coaching staff, players, and fans are all looking for a different ending this year. Achieving success over the next six games would pay dividends on the recruiting trail, which is paramount to the long range success of Duke Football.

2. Will Thaddeus Lewis break Ben Bennett’s record for most passing yards by a Duke Quarterback?

Is breaking the record important in the big scheme of Duke Football? Yes, emphatically yes, it is. Duke is a passing team so the more yards they gain through the air the better the chances of winning games, and Duke Football needs to win games.

On the surface, Lewis breaking Bennett’s record would appear to be an individual accomplishment for the senior, but actually the achievement will represent Duke Football continuing to grow as a program. It will represent the maturation of the offensive line and validate Duke’s receiving corps as one of the best in the ACC. Thad Lewis breaking the career passing yards record should be an important team goal for the Blue Devils.

3. Duke’s receiving corps is deep. The question is who will lead the team in key categories: total catches, yards receiving per game, and touchdown receptions?

In addition to Kelly, Duke has three more receivers with more than 20 receptions on the year: Donovan Varner (27), Conner Vernon (26), and Johnny Williams (22). Those four guys are all primary targets for Thad Lewis and they will all catch many more passes this season.

The offensive line has earned a shout-out by providing Thad Lewis enough time to deliver the ball to his receivers. Lewis has been sacked 12 times, which is tied for third fewest in the ACC. Continued improvement along the front line will be required so Duke’s receivers can participate in some healthy competition between themselves to see who can lead the team in the various receiving categories with the real goal being to increase Duke’s opportunity to win games.

4. Is improvement being made on Duke’s defense?

With so much focus on Thad Lewis and Duke’s potent passing attack, it is easy for fans to forget about the defense. We all can rest assure that Coach Cutcliffe and staff have not forgotten about the defense as defensive improvement is a vital aspect of building a winning program.

Duke has been prone to giving up the big play. It happened against Virginia Tech when Tyrod Taylor completed a 62 yard pass to Jarrett Boykin on third and 34 with the line of scrimmage at the VT 16 yard line. Instead of forcing the Hokies to punt from deep in their own territory, giving up the big play ultimately resulted in a Field Goal and a 20-13 lead for Virginia Tech.

If Duke is to win games down the stretch in 2009, the defense is going to have to pressure opponents’ quarterbacks and force mistakes. Duke is currently 8th in the ACC in total defense, 12th in sacks and 9th in interceptions. Tracking these defensive categories should provide insight into how competitive Duke is over the next six ball games.

On the individual performance front, Vincent Rey is 5th in tackles averaging 8.2 per game. Catron Gainey is tied for 11th with 6.5 per game, while Abraham Kromah is 14th with 6.2 per game. Matt Daniels (5.8) and Leon Wright (5.0) are also in the Top 50. Moreover, Matt Daniels leads the ACC in fumbles forced and Leon Wright is 3rd in interceptions.

In the sacks and tackles for loss categories, Duke has no one in the Top 20. Increasing pressure in our opponent’s backfield has to be a focus area for improvement.

The next six weeks are a potential boon in the revitalization of Duke Football. The team is improving their on field performance week by week, the fan base is excited, and opponents are taking the Blue Devils seriously. The time has arrived for Duke to put together a conference winning streak.

The second six week season kicks-off Saturday October 24th at Wallace Wade Stadium with a 1:30 pm game against Maryland. The Blue Devils are currently favored by eight points over the Terps. Tickets are still available so the Blue Devil Nation encourages everyone to come out and participate in the festivities.

DURHAM, N.C. -- Duke quarterback Thaddeus Lewis has been named the Walter Camp Foundation's National Offensive Player of the Week after leading the Blue Devils to a 49-28 win over N.C. State.  Lewis completed a school single-game record 40-of-50 passes for 459 yards and five touchdowns in the victory over the Wolfpack.

A senior from Opa-Locka, Fla., Lewis accounted for six total touchdowns while engineering the Duke offense to 502 total yards against an N.C. State defense that entered the week ranking first in the ACC in total defense by allowing 239.2 yards per game.  His 459 passing yards mark the fourth-highest single-game total in school history and, with the five scoring tosses, he became Duke's all-time leader in touchdown passes with 59, breaking the previous record of 55 held by Ben Bennett (1980-83).
Nebraska's Ndamukong Suh earned defensive player of the week honors from the organization.
Walter Camp, "The Father of American football," first selected an All-America team in 1889. Camp – a former Yale University athlete and football coach – is also credited with developing play from scrimmage, set plays, the numerical assessment of goals and tries and the restriction of play to eleven men per side. The Walter Camp Football Foundation – a New Haven-based all-volunteer group – was founded in 1967 to perpetuate the ideals of Camp and to continue the tradition of selecting annually an All-America team.