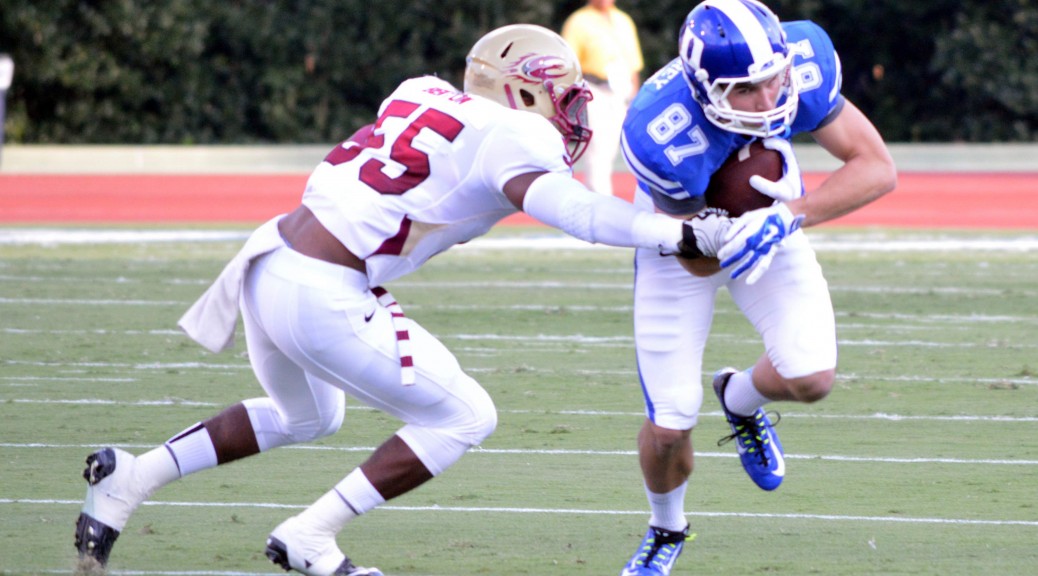 Duke and Kansas finish out a home-and-home series on Saturday at Wallace Wade Stadium in Durham. The two teams last met in 2009 in Lawrence, with the Jayhawks dominating the Blue Devils, 44-16. Much has changed for the two perenial basketball powers since that last meeting, with the Blue Devils coming off an ACC Coastal Division Championship, while Kansas looks to rebuild under Charlie Weis after totaling just 4 wins in his first two seasons.

The Blue Devils are 20 point favorites in this game, against a Big 12 opponent. I'll give you a moment to let that sink in. Over the past two seasons, Duke has seemingly learned how to win football games, while Kansas has found ways to lose. Anthony Boone and the Blue Devil offense should be salivating at film of a Kansas defense that allowed 421 total yards to SE Missouri State in week 2. Under new OC Scottie Montgomery, Duke is looking to spread the ball around in their offense, and expect the Blue Devils to continue that trend. Issac Blakeney, already with 3 TDs on the young season, is sure to draw the attention of the Jayhawks' secondary, who will struggle to match up with his size and the speed of Jamison Crowder, lining up opposite him. His wound continues to take care of the ball, expect another big day for the Blue Devil receivers.

Defensively, it all comes down to containing the elusive Montell Cozart under center. The Jayhawks' sophomore signal caller is able to make plays with both his arm and his feet, and the Duke defensive front will need to be disciplined in its pass rush. Kansas features a veteran offensive line that averages over 300 pounds; Jordan DeWalt-Ondijo and company will need to continue to find ways to cause disruption in the backfield. Cozart is aided by a veteran receiving corps led by seniors Tony Pierson and Nick Harwell, each of whom found the red zone in the Jayhawks' opener. Offensively, Kansas will present the biggest challenge to Duke's young secondary in the first month of the season. De'Andre Mann and Corey Avery pace the Jayhawks on the ground, and an early Blue Devil lead will help to neutralize their effectiveness.

Kansas is a team that can certainly upset the blue Devils should they find a way to put together a complete 60 minute game. In their season opening win, they jumped out to a 24-0 lead behind a balanced offensive attack and opportunistic defense. The Jayhawks forced three interceptions and held the Redhawks to 5/16 on third down.

As Duke demonstrated a week ago at Troy, a balanced, up tempo offense can pose a significant challenge. Though only a sophomore, Cozart has the talent to be a dynamic playmaker and has the offensive weapons to put up points quickly. Expect Weis to have a solid offensive gameplan to attack the question marks on Duke's defense.

While the Blue Devils have taken care of the ball on offense thus far this season, they have failed to come up with takeaways defensively. To pull off the upset on the road, Kansas has to win the turnover battle and limit opportunities for the Duke playmakers.

In what may turn into a Big 12-style shootout, Duke has the more experienced quarterback and the more dynamic offense. Expect the Blue Devils to come out hungry after an inconsistent effort at Troy and put up points quickly. Kansas will struggle to match up with the Duke wide receivers, who will again find the end zone Saturday. The Duke defense will finally get on the board in the turnover department and provide some separation in the second half. If the Jayhawks dare to kick to Edwards or Crowder, expect one of them to break a big return to swing momentum for the Blue Devils. Another solid game from the Duke running back stable will help to seal the victory.

These two programs appear headed in different directions, with the Blue Devils looking to defend their ACC Coastal Division crown and the Jayhawks searching for wins on their schedule. Boone and company will again light up the scoreboard in Wallace Wade Stadium. More free french fries!