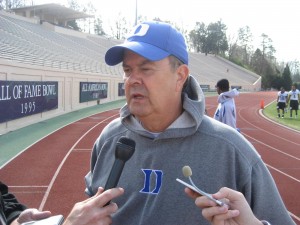 I apologize for being a little late, but recruiting comes first and we've been recruiting.  It's amazing to look at the tape and see how many good things we did but we are not pleased with the plays made against us.  There were some good lessons learned, but give Miami the credit.  We had some opportunities in the game, but we didn't step up at critical times and the game got away from us.

On his feelings after the Miami game-

I'm still angry.  I just told out team that I just did not sense any energy in our team.  I watched the tape and we played hard, but we did not have the energy or the look in your eye that we were going to win the game in the fourth quarter when we were down 11.  That's unacceptable.  There's a difference in playing hard and competing to win and I didn't think we competing to win.

I've seen Vanderbilt on TV, but very little of them on tape thus far.  We will do a little work against Vanderbilt this evening.  I know a little bit about their team playing them the last two years.  I know the staff ... they're an exceptional football team and they do a tremendous job and it will challenge us to go over there and stay in the game.

More on Miami and his displeasure -

I just think you've got the believe you can win and I don't think we thought we could win.  You can only accomplish what you think you can accomplish.  You have to fight through the adversity.  My confidence has wavered at times in my career, but you earn it back.  I just sensed we were not going to win.  I sensed it and you could have gone in and turned the light off.  I looked around, the stadium was empty with fifteen minutes to go.  It's a situation we have to break.  I believed we could, that was until I walked around looked and it was not just guys playing in the game.  All of our back up guys ... there was no hunger in their eyes, no attack in their eyes.  I saw the hunger in earlier games, but you've got to do it when it's hard.  I know that Rome wasn't built in a day, I'm not mad at them but you have to earn it.  None of these guys - what I thought about last night was that I didn't have any of these guys that have done it before.  They haven't done it, they haven't lived it.

That was a howitzer.  I don't think anyone could have caught that ball.  I've never seen one get caught in the wind like that one did.  It flipped the field position on us.  We then had a bad series, which is easy to do when you get backed up deep in your territory.

More on Miami and their freshman quarterback -

They were bigger than us and faster than us.  You can't back off of them and just let them make the plays.  They just made the plays.  Every time the QB ran he made the play.  I was surprised he ran the ball as well as he did.  Once he got out of the pocket guys didn't know whether to leave go to the ball or stay on their man.

Riley struggled on Saturday.  How do you as a coach get other kids to step up and make plays?

Well, you just keep going at it and practiced.  Again, I hate to keep using that word, but they have to "earn" their confidence level and then they have to learn our (staffs) confidence.  Eron is not going to drop balls like that all the time - he hadn't been doing so in practice.  You are going to ride your horses pretty good ... I had actually talked to our seniors about them making big plays until our young guys can get into that mode.  We haven't had a chance to talk (since Miami game) on both sides of the ball on how we are going to have to make some big plays.

On the rushing attack having more success and game calls -

Well, I've told y'all on many occasions that we were going to work on that in the off week and challenge our kids.  It's still a work in progress.  At the end you could see how explosive their athletes were.  I let the time run off the clock late in the first half was to consider keeping the ball.  I know we needed the points with a field goal, but we thought about trying to run the ball off the clock.  Had we gone for it and been successful, we would have gone in up 14-7, 17-7 or 21-7.  I really wanted that clock to run down, but they just ripped down the field in less than two minutes to score.  (making it 17-14 at the half)

Alright folks, thank you very much and I apologize for being late, but obviously, we've got a lot of recruiting to do.[/private]

[private]The Duke-Miami game was a tale of two halves and the second and decisive half belonged to the Hurricanes.  Duke took a 17-14 lead into the locker room,  but Miami erupted for 35 points, after the break, which included 5 touchdown passes.  Four of those were thrown by a true freshman who had a breakout game.

The Canes came into the game winless in the ACC and for awhile it looked as if Duke would send them to their third loss.  Miami took advantage of their opportunities and executed when they had to.  After all, they are tops in the ACC when they enter the red zone and it's as if their players all want to step up and score when these situations are afforded.

Duke held a 24-21 lead later in the third, but a 83 yard net punt shifted the field and momentum for good.  That momentum was helped by the Blue Devils top playmaker, Eron Riley.  The normally sure handed wide out dropped numerous passes within his grasp, but the real killer was a blocking below the waste penalty.  That call pretty much sealed the deal for the Canes in that Duke lost a nice running play.  The Canes then came back with a sack of Lewis deep into Duke territory forcing a punt.

With Duke's top play maker having an off day and nagging injuries to the remaining wide outs, Miami showed why Coach Cutcliffe often talks about speed.  The Canes simply ran past Devil defenders on runs and patterns and their depth was evident.

While the final score of 49-31 looks bad on paper, the game was close for a long time.  There were a couple of positives for Duke.  The first was that they turned the ball over just one time and the second is that they got their running game untracked.

Duke must now rebound in order to play a tough Vanderbilt team on the road next Saturday.  If Duke is to win that game, some players will have to step up and make the plays it takes to turn the corner to victory.[/private]