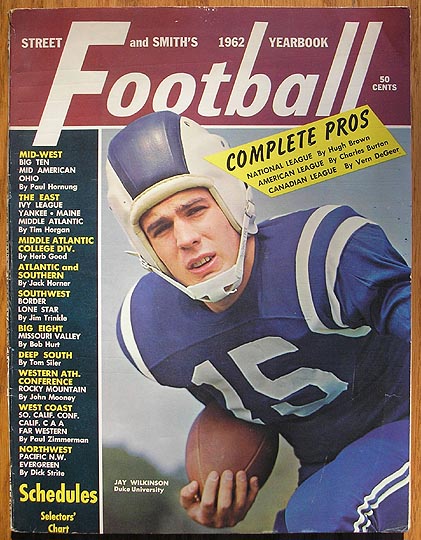 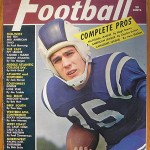 Before the advent of the World Wide Web, football fans would anxiously await the beginning of June when the college football preview magazines would hit the stands.

A lot has changed since then, with information as close as the click of the mouse. No longer do people have to live with somewhat dated information.  But the preview magazines still hold a special place in the hearts of many, and they have just now started to hit the newsstands.

So I made the journey to the local book store yesterday and I will pass along what the previews think about the team I cover, the Duke Blue Devils.

The three magazines that are currently out are Athlon, Lindy's and TSN or The Sporting News, which merged with Street and Smith's a few years back.  While one would think the marriage of two great partners would produce a special yearbook, the results are more bare bones than one might expect, and that means Athlon and Lindy's are probably a little better.

My favorite pre season magazine, Phil Steele's College Football, has a few days left before it hits the stands. While there is not as much on the current year's teams beyond the basics, they make up for it with some amazing history, stats, and lists of interest.

Anyhow, Duke is picked 7th in its division by each of the publications --  dead last in what is now a 14-team league.  In short, the Duke program is still earning respect out there even as they come off their first bowl season in quite some time.

Athlon ranks the Blue Devils the 73rd best team in the country while Lindys' rates them 82nd. TSN does not do the national ratings. Atlon, which is the only one to project win-loss record, predicts the Blue Devils to go 2-6 in the ACC and 5-7 overall.

As for pre season accolades for players, Ross Cockrell is 1st team All-ACC in all of the publications. Duke punter Will Monday is listed as first in two of the three projections as well.  Lindy's lists Duke kicker Ross Martin as the 7th best place kicker in the country and they slot Will Monday in as the third best punter in the land.

It takes time for perceptions to turn around with concern to pre season prognostications, so I am not looking for too many more polls to have the Blue Devils picked higher than sixth in their division, but it is clear that Duke is headed in the right direction, as each of the publications acknowledges.  So while the pre season magazines certainly don't carry the weight they once did, they are still popular in some circles and there is nothing like sitting on the deck in summer with a hard copy to thumb through.

As for the coming season's edition of the Duke Football team?  There is nothing more satisfying than proving some arm chair know-it-all types wrong.

Sidebar - The 1962 Street & Smith's pre-season yearbook picked Duke 2nd in the nation, and featured Jay Wilkinson on the cover.  A nearly mint copy brings about 40 bucks in the collector's market.