Well, we took one on the collective chin last week as it was upset city in the top 25. With rivalry week upon us, anything can happen and the coveted BDN inaugural pick'em championship is still up for grabs.

With the Victory Bell at stake this week, we welcome in former Duke lineman Brandon Harper, who knows what it's like to face the Tar Heel pass rush. Thanks for joining us, Brandon! 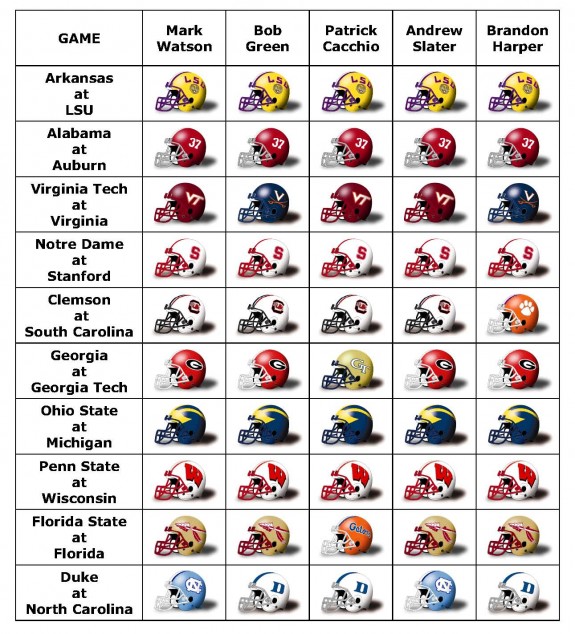 Mark - A handful of seniors will play their last game for Duke as they travel to North Carolina to take on the Tar Heels. If Duke were healthy, I think they could pull off a win but the team is battered at this time. Still, I expect Duke to play with a lot of heart and give the home team all they want only to come up just short in the end. UNC 28, Duke 24

Bob - Duke can salvage a disappointing season by knocking off Carolina and returning to Durham with the Victory Bell. This game like all games will be decided by which team controls the line of scrimmage, wins the turnover battle and executes without making mistakes. Duke must achieve balance on offense by successfully running the ball and I'm still waiting for the special teams to make a huge play such as a blocked punt or return for a touchdown. Tomorrow would be a great time for something special to happen.
Duke 28, UNC 26

Patrick - The Blue Devils are desperate for a win to build momentum for the program into 2012. Duke's seniors led a strong effort a week ago against Georgia Tech, and they'll have one last chance to ring the Victory Bell on Saturday. It's Duke vs. North Carolina and anything can happen, but I think Matt Daniels and Donovan Varner will find a way to win this game against their rivals. Duke 28, UNC 27

Andrew - Although Coach Cutcliffe has brought a level of respectability and stability to the Blue Devils, Duke is looking to end the extensive losing streak to arch rival, North Carolina. The last two weeks have brought promise in frustratingly close games to quality opponents. If they can accomplish the and defeat the ethically challenged Tar heels, it would generate momentum for next year's squad and show a clear sign of progress for in-state recruiting. Unfortunately, a chance to ring the victory bell is likely at least a year away. UNC 31, Duke 21(unfortunately)

Brandon - Rivalry Week, lots of emotions will be left on the field this week. For the Blue Devils to achieve their desired outcome they must come together and play their most consistent game of this half of the season. History tells us this is always a close game; this year will be no different. With both teams ability to rally in the second half, it will be interesting to see how this one turns out. I think the Defense will continue to feed off senior safety Matt Daniels and give the Carolina offense some trouble. If QB Sean Renfree and the Duke offense can start where they left off last weekend against Georgia Tech, the high powered offense could potentially lead them to a win. I see Duke coming out playing with their backs to the wall, feeding off adrenaline from rivalry of this game and the seniors especially Senior Offensive lineman Kyle Hill who's season ended early, Duke takes this one and rings the bell Duke 31, UNC 28

Thanks to all who followed along with us this season, and a big thanks to all who participated. Please send your feedback for our inaugural college football pick'em to patrick@bluedevilnation.net. Happy Thanksgiving!