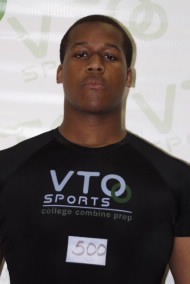 Coach David Cutcliffe and his Duke Football staff continue to recruit well in the state of North Carolina landing Takoby Cofield over the weekend.  Cofield (Tarboro HS, North Carolina) 6-6, 280) chose Duke over East Carolina, Virginia Tech, Wake Forest from his offeres.  Clemson and Tennessee were close to offering and Cofield believed that North and South Carolina would follow suit.

Cofield is the first lineman in the class of 2010 and Duke now has a total of seven players (five in state) committed early in the process.  While Cofield plays tackle at Tarboro, it is believed that he could play either guard or tackle at the college level.

Any way you cut it, Cofield is another key ingrediant for Coach Cutcliffe and his staff.  As their recruiting efforts continue to flourish, look for positive changes on the field where Duke is poised to bring consistent winning football to Durham.