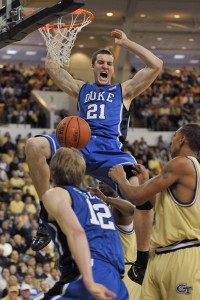 The Last Time Out
Duke fell to N.C. State, 88-74, on Wednesday for its third straight road loss of the season.

The Wolfpack shot 58.2 percent from the field in the game, including 64.0 percent in the opening 20 minutes of play.

The Last Time vs. Clemson
Duke posted a 74-53 win over Clemson on Jan. 3, 2010 at Cameron Indoor Stadium. Jon Scheyer and Nolan Smith each had 22 points in the win as the Blue Devil defense limited the Tigers to 12 first-half points on 5-of-30 (16.7 percent) shooting. Duke held Clemson to 32.7 percent shooting for the game and forced 17 turnovers.

Texas Southern, Nevada, UC Davis and North Dakota State are the only other schools with three players ranked among the top 10 scorers in their respective leagues.

The trio of Scheyer, Smith and Singler is the highest scoring group in the NCAA this season and the fourth-highest at Duke under Mike Krzyzewski.

Duke Raising Awareness for Haiti Relief
Duke Athletics has joined a national fundraising effort titled “Save Haiti Saturday” to aid in the nation’s earthquake recovery efforts. Beginning with Duke’s men’s basketball contest at Clemson on Saturday night (ESPN, 9:00 PM ET), the 15 Duke teams currently in competition will display “Save Haiti Saturday” patches in the upcoming weeks to maintain high awareness for the relief effort in Haiti.

“Save Haiti Saturday” is primarily an awareness campaign that benefits Project Medishare for Haiti, Inc. That organization collaborates with Partners in Health (PIH), one of the organizations through which Duke is coordinating its Haitian fundraising relief efforts. Duke alumnus, Dr. Paul Farmer, founded PIH and currently serves as the United Nations Deputy Special Envoy to Haiti.