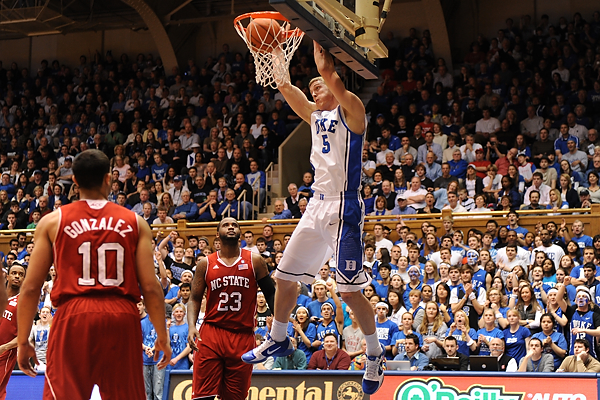 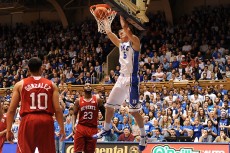 • The game is being televised by ESPNU with Mike Breen (play-by-play) and Doris Burke (analyst) calling the action.

• Duke will be playing its fourth game in an eight-day span on Friday. The Blue Devils depart Durham on Saturday morning to head to the EA Sports Maui Invitational (Nov. 21-23).

• Coach K enters the contest tied for fourth with Jim Phelan (Mount St. Mary’s) for wins at one school. Krzyzewski has earned 830 of his NCAA record 903 career wins at Duke.

• The Blue Devils have won the last 22 meetings in the series, with 20 of the 22 victories coming by 10 or more points.

• The Duke-Davidson series dates back to the 1909 season with Duke recording a 22-8 win in the series opener.

Duke vs. the Southern Conference

• Duke is 142-24 all-time against teams currently in the Southern Conference.

• Under Mike Krzyzewski, Duke is 47-2 against the Southern Conference.

l Mike Krzyzewski became the winningest coach in NCAA Division I history on Tuesday. He also moved into a tie with Jim Phelan for fourth on the all-time wins at one school list with 830 victories at Duke.

l Coach K has recorded exactly half of his 830 wins at Duke at historic Cameron Indoor Stadium. The Blue Devils are 415-55 at home under Krzyzewski.

l The Blue Devils have won 38 consecutive games in Cameron Indoor Stadium with 32 of the victories coming by 10 or more points.

l Duke has won 31 consecutive games in November, dating back to a 73-62 loss to Marquette in the championship game of the 2006 CBE Classic. The Blue Devils are 111-10 all-time in the month of November under Coach K.

l Duke is 99-28 all-time when ranked No. 6 in the AP poll. The Blue Devils have won six straight games when ranked sixth overall.

l Andre Dawkins and Seth Curry combined for 46 points, 10 rebounds and eight steals in Tuesday’s win over Michigan State. The guard tandem went 8-of-15 from three-point range with Dawkins going 6-of-10 from behind the arch.

l Seth Curry is 8-of-14 from three-point range this season and now has 72 three-point field goals in 40 games a Blue Devil. He is shooting 44.7 (72-of-161) percent from behind the three-point arc in his Duke career.

l Ryan Kelly has come off the bench to score in double-figures in all three games this season. He is second on the team and 13th in the ACC in scoring at 14.3 ppg.

l Duke is shooting 48.2 percent (27-of-56) from three-point range through three games. Seth Curry, Austin Rivers, Ryan Kelly, Tyler Thornton and Quinn Cook have each knocked down two or more three-pointers in a game this season.

l Duke has had a different player lead the team in scoring, rebounding and assists in all three games this season.