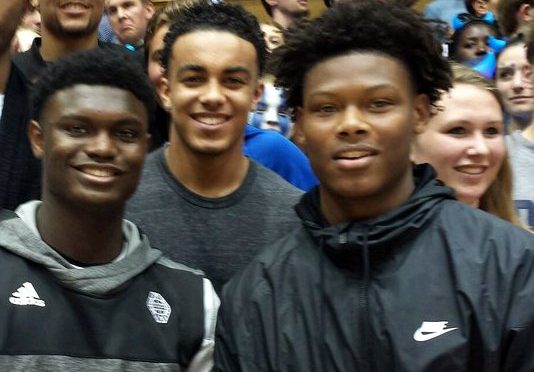 Duke is fortunate to have Cameron Reddish and Tre Jones already committed to play for the Blue Devils.  While each has made their collegiate decision known already, neither has made their official visit.

The two future teammates are already friends and they will get to come in and play with this years team while checking out campus life this weekend.  This will also be a great time for them to talk with the Duke staff before their high school season begins while gaining knowledge on how to improve their game.

Both Reddish and Jones are the top rated prospects at their positions per ESPN.  Duke also hosted R.J. Barrett this weekend and are fully immersed in having him become part of what would be a dynamic trio.

Duke will need to sign several players in this class in that they expect to lose a bevy of talent to the  NBA and graduation.  The Blue Devils are still recruiting several prospects and the staff is currently on the road checking them out as I type.  Duke is checking out Bryan Antoine and Scottie Lewis, two big time prospects today.

Duke fans will see Reddish and Jones during the season as well.  The 2017-18 Duke team will likely bee the favorite in the ACC and possibly the nation going into the season.