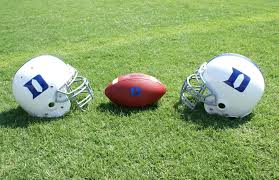 What we learned in week one

Duke will play a lot of true freshman this season.  Several newcomers on the defensive front and in the back got significant snap counts.  The Blue Devils ran all over the NCCU defense as they walloped their cross town foe 60-7.  The only truly concerning thing in the game was a missed extra point.

The Wildcats are picked 2nd only to Wisconsin in their Big Ten West division.  They return 16 starters off a bowl team and could be the most experienced team Duke will face this season.

Northwestern is really strong on the defensive front with physical veterans at every position and they are solid on the back side of the defense as well.  Their top three recruits are even defensive lineman, so running the ball against them will be a challenge.  Phil Steele rates their DB's as 2nd best in the Big Ten and touts their QB and RB situation as 3rd and 2nd respectively.

The Wildcats feature a veteran duo of QB Clayton Thompson and RB Justin Jackson on offense.  Both of these players are among the nations best at their positions.   Thompson racked up 352 yards passing in their opening win over Nevada.  The Wildcats at over 500 yards in total offense.

How Duke can win

The Blue Devils are tabbed a 3.5 underdog at home against Northwestern.  The Wildcats will test the young Duke secondary in a big way, so limiting big plays is a key.  This weeks opponent is very balanced in all phases of the game but their special teams are suspect.

Duke will need to establish enough of a run against a tough front to help the passing game.  With Shaun Wilson and Brittain Brown this is possible.   The Blue Devils will also need some big plays of their own while not turning the ball over.

The main key could be special teams play.  Duke cannot afford a missed chip shot against a good team.  Nor can they allow for a big momentum swinging returns to the end zone as happened recently in this series.

If you want to beat Northwestern, you cannot play from behind. Duke needs early success on the scoring front or it could prove to be a long day of playing catch up against a veteran team.  Northwestern has perhaps their best team in a decade on paper and David Cutcliffe is 0-3 against them.  As fate would have it, they go off the schedule next season when they will be rebuilding.  That said, now is the time for some sweet revenge.

Duke is young for sure, but they are also talented and fast. Northwestern knows how to win, but this Saturday they face a fired up group of Blue Devils who gut out a close win.