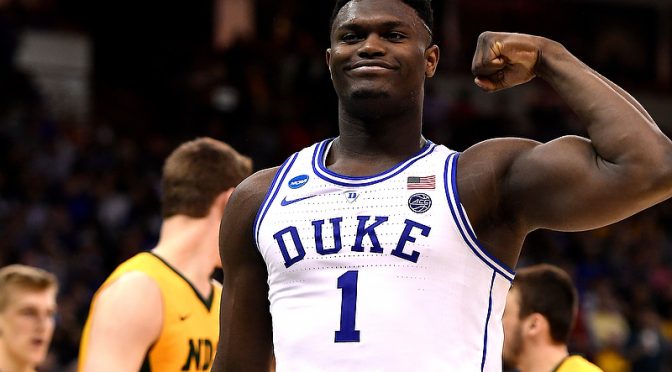 MINNEAPOLIS, Minn. – Duke freshman Zion Williamson was named the 2019 winner of the Citizen Naismith Trophy that was handed out Sunday by the Atlanta Tipoff Club to the men’s college basketball most outstanding player.

The announcement and presentation of the Citizen Naismith Trophy -- named after the inventor of basketball, Dr. James Naismith – was made at the Naismith Awards Brunch at the Nicollet Island Pavilion in downtown Minneapolis.

“I want to thank the Citizen Naismith committee for selecting me as the Player of the Year,” said Williamson. “It is truly an honor to receive this, and join such an elite list of former Blue Devils to have also won the award. There were so many great players who could have won this award this year. I can’t thank my teammates, coaches and family enough for helping me. This is a team award, and it’s an honor for me to accept this on behalf of my brothers.”

Laettner, Virginia’s Ralph Sampson and UCLA’s Bill Walton were among the former Naismith winners on hand Sunday to help present Williamson his trophy.

“Zion is absolutely deserving of this year’s Citizen Naismith Trophy,” said Duke head coach Mike Krzyzewski. “He handled himself with such class and humility this season, especially given what he accomplished, both individually and with his team. Zion is a great representative of the game, and is a pleasure to coach. Duke has a long history of Naismith winners, and Zion certainly belongs in that elite company.”

A consensus first-team All-American and the AP, USBWA and NABC Player of the Year, the ACC Player of the Year and the ACC Tournament Most Valuable Player, Williamson was a force on both ends of the floor. He finishing tied for the ACC lead in scoring with 22.6 ppg, third in rebounding (8.9 rpg), second in steals (2.1) and fifth in blocks (1.8). His .680 field goal percentage led the ACC and is second nationally.