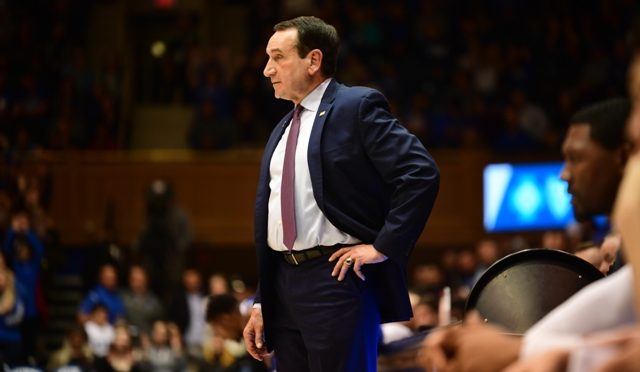 Pittsburgh head coach Jeff Capel is and will always be a part of the Duke Brotherhood. During last evening's Duke win over Pitt, the Cameron Crazies set into motion a chant which went, "Jeff Capel sit with us."

That chant drew the ire of Duke Coach Mike Krzyzewski. As the first half ended Krzyzewski went over to the students clearly perturbed, telling the fans to stop it, he is one of us.

Krzyzewski had a locker room to get to, so he could not linger to chat about the situation. And that brings up a key point I will shed light on to make for some clarity.

A Duke Basketball game for Mike Krzyzewski and his staff is all business on game day and especially in live game competition. A look around on game day will see his managers working in military unison. Everything is structured and that is one reason the program has flourished.

Some in the media seemed shocked by Krzyzewski's action, but not so much me. Having covered Duke for over a decade in Cameron Indoor Stadium, I have pretty much seen it all. And for that matter, heard it all be it the fans or what is considered Cameron decorum.

But let's back up a second, for Krzyzewski also said that he misunderstood the cheer during his post-game press conference. And he apologized for the situation, but he was still mildly taken aback and I will explain my take on that.

Here is a comment from Krzyzewski on Capel, “I love Jeff. Jeff is my son, man. We’re part of a brotherhood. Playing against him is very difficult. I don’t like it.”

There were multiple levels of emotion in Cameron Indoor Stadium last night. Krzyzewski has told the media on many occasions he hates coaching against his former players and from covering this team for a long time I know this to be true.

Add to that, Krzyzewski coached Team USA to three Gold Medals and those teams were led in part by recently departed Kobe Bryant. And Duke commemorated his passing with a pre-game ceremony complete with special warmups and 24 ticks of silence.

With so much going on in a game Duke needed to win to move in a second-place tie with Florida State in the ACC, it should not surprise long time followers of the team that Krzyzewski did not like a cheer.

Even after the air was cleared and apologies made, the chant still puzzled Krzyzewski and others who realized the timing of the cheer was off and the head man seemingly thought the cheer was taunting at first.

"I apologized for you know... let us think of a different chant," said Krzyzewski before lightening the mood offering up some basic cheers. He continued by saying leave the other guy alone meaning Capel.

But he also brought up the fact that what was said was not a basketball cheer. Look, there is no doubt the Duke students meant "Jeff Capel sit with us" chant as adoration and respect. And to be fair, the students follow the lead of a single individual who starts the cheers.

What was questionable about the timing of the cheer is that it bled into live game action. Also, the "So and so, sit with us," chant is in place for a prospect or recruits, former players and the occasional celebrity visitor to Cameron but not the opposing coach.

I mean, was Jeff Capel expected to acknowledge the cheer during live game action? Trust me, the coach of another team in the heat of an ACC basketball game is not going to smile and wave even if he is a Duke alum.

In fairness to the students, the cheer started during a timeout. The problem is it continued for a good bit during game action and was awkward. While Krzyzewski and Capel are locked on their teams in live game action, the cheer felt out of place.

The truth of the matter is that the cheer while innocuous in nature came at an inappropriate time. And it is the first time I have seen the cheer used in a way that I cannot fathom why the support was not on game action.

I see the whole issue as a learning experience for all. But it is expected be it fair or not for some who steer the cheers to do so with a basketball IQ. Save the cheers for the right time but do not distract from actual live game action.

The good news is this will fade, but because of the situation, Krzyzewski will get a little bad press from varying uninformed spins. It was an emotional night where people should be talking about the former Olympic coach and the Duke tribute to Kobe Bryant not to mention a good win.

The students can give their coach an assist and help keep the focus on where it should be just paying a little more attention to detail. But make no mistake, Krzyzewski and Duke need the Cameron Crazies and he stated that he loves them, something that did not get lost in translation.