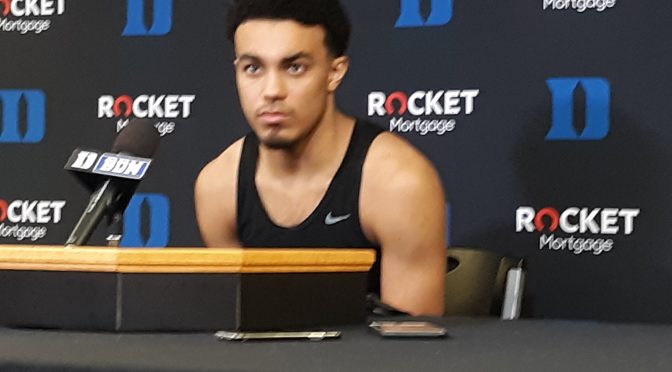 As a Tre Jones last-second shot bounced off the rim the Duke Blue Devils lost their second consecutive game and their third in the last four outings. A 52-50 loss to Virginia, a team that should have been ranked due to their play of late is not the end of the world, but considering just a play or two would have altered the outcome leaves one feeling empty.

The Blue Devils had their opportunities against Virginia, but a troubling trend continued in the setback. A glance at the box score shows that the team past Tre Jones and Vernon Carey Jr. were a combined 6 of 34 from the field on offense.

To make matters worse, the Blue Devils had an alarmingly paltry four total assists in the loss. Thankfully, Duke has done enough work to warrant a double-bye in the fast-approaching ACC Tournament, but there is plenty of concern with how Duke closes out the regular season against crosstown rivals N.C. State and North Carolina.

Not that long ago, fans and the staff had to feel good about their final two games in Cameron, but now many doubt they can end the skid against hungry teams.

N.C. State can punch their NCAA Tournament ticket with a win and the Monday turnaround gives Duke little time to regroup. One game at a time sure, but it was hard not to notice North Carolina's dominating road win at Syracuse as well.

Early in the season, the Blue Devils had several different players stepping up on different nights which helped them to a fine start. As of late, it is as if everybody on the team is deferring to Vernon Carey and Tre Jones to handle the load.

And they cannot will this team to win by themselves.

As good as Carey and Jones can be they are not Zion Williamson and R.J. Barrett from a season ago and they cannot win games taking on the big two role as could two of the top three picks in the NBA Draft.

For whatever reason, the rest of the Duke cast is struggling. Perhaps some of the freshmen have hit the so-called wall, but the Blue Devils are not getting much help from their upperclassmen as well.

If Duke hopes to get past this adversity, it will only come from playing team basketball where other players step up. At this point in the season, the Blue Devils expected to develop a third scoring option, but inconsistency is preventing players with the potential to fill the role.

Duke is not relocating the ball quick enough of late to help handle the pressure. And their players are not playing as if they know and trust one another in certain games.

The aforementioned issues allow opponents to double down on Carey and pressure Jones. And when Duke is not sharing the ball where they have had recent outings of four and six assists, well, you are going to keep losing games.

Duke is starting to tumble in the rankings and their hopes for playing in Greensboro in the NCAA's first round took a major hit. But this team should not even be thinking of that. They should try and find a way to get some swag back for it has been missing of late.

The Blue Devils will have had little time to make adjustments before tomorrow's game with N.C. State. But they can hopefully understand they need to find five players who are willing to play winning basketball when on the court.

"I think this is a key period for us (to) find out who we really are," said Duke leader Tre Jones after the loss to Virginia. Duke faithful hope the Blue Devils are more than they have shown of late.

The Duke versus N.C. State game tips at 7:00 on ESPN. The Blue Devils are currently 13-5 in the ACC and 23-6 overall going into the two-game homestand which ends he regular-season.