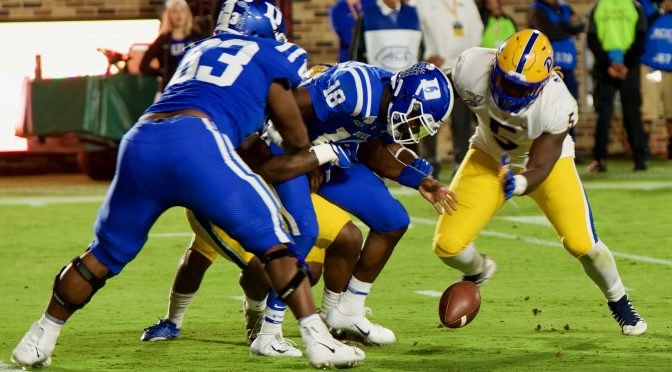 DURHAM, N.C. – Duke football continued its preseason grind on Tuesday with its 10th practice of fall camp at the Brooks Practice Facility.

"I feel like the only thing that we would lose is team cohesion a little bit on the field," Blackwell said when asked about dealing with delays and the COVID-19 pandemic. "I think we all got our individual work at home. It kind of kept us in it. I think physically, we're still where we're supposed to be. But the one thing that I would say that was kind of off at the beginning, especially with the COVID situation, was the team cohesion."

In 23 games, 15 starts, Blackwell has 57 tackles, 13 pass breakups and one forced fumble. He owns two-plus tackles in 15 games, including a career-high six stops against Wake Forest in 2019. Back in 2018, Blackwell set the Duke bowl game record for pass breakups with four against Temple in the Walk-On's Independence Bowl.

"Oh, it means a lot. Not having him for two years on the field was detrimental. But it made people like me and Leonard Johnson you know that much better being leaders while he was away. Now that we have him back, he's brought back that spark that we've needed on the field. Even off the field the past two seasons, he's been huge for us mentally just teaching us the ropes. Getting us to where we need to be with Coach (Derek) Jones and now Coach (Chris) Hampton. I feel like he's been a huge part of our success here on and off the field."

Blackwell also gave praise to the defensive line, stating they have been a huge part of the backfield's success with their pressure up front.

"My past four years the d-line has been a huge part of our success in the back. You know we got Chris (Rumph II), Victor (Dimukeje), Drew (Jordan) in there. We've also got Congo (Derrick Tangelo). You know all those guys they've come together very well in the past couple seasons. They've grown together and figured out ways to rush the passer successfully to help us in the back. And then you got our backers in Shaka (Heyward), who's grown up and played a huge role last year as a redshirt freshman. I think as we continue to grow and continue to practice, we'll just keep getting better."

Hamilton, who joined the team as a graduate transfer from Stanford, spoke with the media about where he thinks he'll best be able to help the Blue Devils this upcoming season.

"I've been working at tackle both with the ones and twos," Hamilton said. "Coach (Greg) Frey said we don't have a depth chart yet so we're just going out competing every day and playing football. I'm definitely looking forward to playing tackle again. But it's been great in the past to play every single position except center just to show my versatility. But like you said, my skill set is definitely tailored toward playing tackle. I'm excited to get back to that."

Hamilton has seen action in 27 career games, making 10 starts on the offensive line. He comes to Durham a two-time Pac-12 All-Academic Second Team honoree and helped the Cardinal compile a 32-20 overall record, three bowl game appearances and a pair of national top-20 rankings in the Associated Press final poll during his four seasons.

"My mentality is that you know everything happens for a reason," Hamilton said when asked about the irony of Stanford not playing football in the fall. "There's a bigger picture to everything. Sometimes there are going to be obstacles or hard times in front of you, but you just got to weather the storm. You know when I decided to transfer back in December or January, we didn't know that all this was going to happen. But you know, I'm glad that I'm here. I'm glad that the ACC is still trying to move forward with this as safely as possible. I'm just looking forward to getting back out there with a team. You know that's our mindset, ready to compete for the same goal.

"I'm super excited about this group this year," Hamilton continued. "We got guys returning with experience and we got young guys coming along as well. Like I said Coach Frey doesn't have a depth chart yet, so there could be a combination of five guys out there that you know nobody has seen before. But I think we're all coming together well. All the guys are helping teach the younger guys the playbook, techniques, fundamentals, and things like that. And then you know as much as we can off the field, we're still trying to build that chemistry. It was a little difficult for me at first coming in, being the new guy, but you know since camp has started and we've been spending more time together the chemistry is definitely growing. I'm excited to see what we do this year."

The Blue Devils' amended 2020 schedule has them scheduled to kick off their season on the road at Notre Dame on Sept. 12.