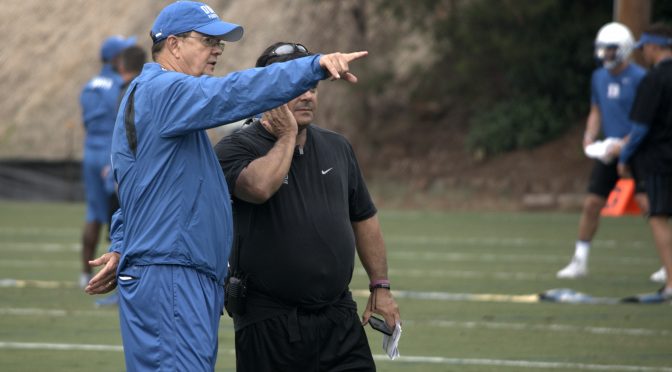 David Cutcliffe Duke Football Head Coach
(Ref.: Opening Statement)
"It's fun to just talk about the season, a real game and game week, in 2020. Nothing has been normal as we all know about this year for the most part. But you know we're starting in a very historical place that college football has been such a great part of Notre Dame as an institution. I think it's unique and it's appropriate that 2020 opens in South Bend against a great team first of all, a top 10 team without a doubt. Just look at their ability, their talent. But as a program, one of the top five programs in the history of college football. So, it's a great opportunity to test your team. It's a great opportunity to energize your team. And when we found out we were playing Notre Dame up there to open, I think that helped us realize how big a challenge that is. I think it really did infuse some energy into our camp and into the preseason work and practices.

"Notre Dame is formidable. They're physical. They've got a great player quarterback in Ian Book. They have a great offensive front and plenty of skill around there defensively plus a lot of people back that are big time play makers. You see their speed. You see their strength on defense. And then they're outstanding in the kicking game. They've got good specialists. But beyond that, their players play hard. They compete. They're well-coached. Brian Kelly does a great job. The coordinators do a great job. I've spent obviously hours and hours looking at them, so we'll find out a lot about ourselves. Our team has done a great job of staying focused doing what we've asked them to do. We've stayed as healthy as we could. When it comes to the virus, we have stayed as healthy as we could to whatever level that is. Certainly, losing Jack Wohlabaugh was a tough blow but for the most part, our team is healthy and ready to move forward."

(Ref.: On what made Chase Brice stand out during the three-man QB battle)
"Well, I think it changed weekly. One of the things that took a bit and it would, is you had two guys competing for the job that knew the system in the system. I think Chase you know, as he got more comfortable with our system what you started seeing was his experience. He's played a lot more football at this level than the other two have. Chase played a lot of games and saw a lot of game time at Clemson. You could see that pocket movement and him just feeling natural in a pocket. The timing mechanism of throws and as he got more comfortable his accuracy level grew in all of the throws whether it was deep ball's or intermediate short layoffs. He just became more and more the most comfortable quarterback on a day to day basis. As the week closed out last week, I think it became more obvious and then we made the decision to start him at the Notre Dame game.

"But like I said in the release, it's not just words. Chris (Katrenick) and Gunnar (Holmberg) both have played outstanding. They're talented players. They're doing everything that's asked of them. So, certainly the circumstance is going to be fluid. But I think Chase earned this start without a doubt. He's a talented young man. And does a lot of things extremely well."

(Ref.: On where or not Duke's backup QB situation was set)
"That's completely fluid right now. And it might be the situation of the game or the circumstance. Both of those guys have great strengths. Chris Katrenick is really a master of our system. Throws the ball really well and is more of a drop back guy. Gunnar's throwing it really well. But Gunnar gives you the dual-threat. He's got a lot of speed and a lot of things that he brings to the table. So again, it would be the circumstance right now as they're bracketed both as number two. And I mean, truly bracketed there's no three. We've got to a starting quarterback and then we've got two backups."

(Ref.: On whether or not he will use the backup QBs for situations like short yardage plays)
"You know that's always a possibility. Right now it's not the highest priority level for this ballgame. The uniqueness of our practice and the experiences we've had to deal with during camp. The amount of time, we can put into different things is more limited than what it's been in the past. But that's certainly a possibility that you could see, you know either one of them in this game. But I'm not ready to say I want to go into the game with that mindset. We've got a starter. We're going to go play and go play that way. I think that's the best approach to start the season."

(Ref.: On his team's protocols especially heading into a game week)
"The first thing I think all of us need to realize and know is that player health and safety is number one in everything we're doing. We're taking the time that it takes and that's why I'm mentioning time. It's not just the testing. It's the protocols. It's the two different locker rooms that we're using. It's the physical distancing. It's the masking. I feel really awkward now without a mask because I wear one all day long. You know every bit of this requires our players to have extreme discipline. Could not be more proud of them and what they've done. I think the NBA has showed us that to whatever level, you can create a bubble and that's what you have to do. Our guys have done a great job with that without necessarily being in a bubble.

"But hygiene, masking, distancing all of that has played a role in it. Testing has played a role. And we've been testing twice a week. Moving into in the next few days, we'll be going into daily testing. I think the conference is doing three test a week for every institution. But we're going to be moving into a daily regiment and that takes time. We're willing to give the time to do that again. We want to keep our players safe. We want to keep all of our personnel that work with our players and everyone that comes in contact with them safe. It's important to us. It's important to Duke university. We're going to be diligent in every aspect in that regard. So, we've got a lot of different ways we're going about traveling and how we're going to do it. It's a unique time. I've learned a lot about, I mean, a great deal about how you can prevent the spread of any infectious disease. We will continue on a lot of these paths in the future. Hopefully COVID-19 gets behind us at some point. But I still think we've all learned a lot about trying to stay healthy and safe."

(Ref.: On why other schools in the triangle have struggled with COVID cases but Duke hasn't)
"Well, that's a great question. I do think it's probably multiple things. I would start by saying that Dr. (Vincent) Price and his team – I know the time they've put into this starting last spring. How diligent they've been, it's been beyond i­magination. They've created an environment on campus that everybody is focused and conscious of it. Bob Weiseman and Becca Wilusz here in the athletics department who are running all of this protocol and heading this up for us in athletics are absolute superstars. Kevin Lehman in our office and our operations here within football have been diligent and phenomenal. And then certainly none of this happens without your players buying in to what they're asked to do. I do think the smaller numbers of people that we have around help. We've got them in individual rooms. We're willing to take that cost on. So, they've been able to isolate themselves to some degree. It's a sacrifice to be young people and not be out and be social and you know I don't know how they do it. I let them know at least every other day that I admire what they're doing. I think they're very bought into each other and feel responsible to each other. I tell our parents all the time we lead the country in great parents. I think our parents have had a great influence on these young men as well. So, it's a combination of things. But Dr. (Kevin) White here in athletics, Dr. (Vincent) Price, the leadership here has been just amazing to me and enabled us to put ourselves in an environment where we have a chance to be successful."

(Ref.: On having to rebound after the loss of veteran center Jack Wohlabaugh)
"Well, it's been tough because it's you know its one of your captains. You quickly have to move forward in which we've done and we do have multiple people that can snap and play center. Casey Holman has played center during camp. Rakavius Chambers. We've got a freshman, Graham Barton, who is doing a tremendous job. True freshman that's played tackle and center. I cannot say enough about him. Elijah Wroten, who is a redshirt freshmen, is another candidate in there. Those two are the two obvious backups behind Will Taylor. And Will is playing the best football he's played since he's been here. Thank goodness, it's timely. Addison Penn another center that's a true freshman has been out with injuries. So, we hope to get him back soon. And then we've worked Jacob Monk there. We've about covered everything that you can possibly cover and it's unfortunate because we had Jack, Will and probably Addison in that order in our minds. And then two of those three go down. But I can't say enough our players and them working hard to step up. We're not missing a beat. So I'm encouraged by what I'm seeing."

(Ref.: On what are Duke's keys to staying competitive this year after falling behind early last year)
"Well there is no question we didn't slow them down, we didn't move the ball and we didn't score points early on. I think we've got to be aggressive on both sides of the ball. We can't be afraid. We can't play on our heels. I thought we got on our heels a little bit on both sides of the ball a year ago. They're talented. They are outstanding. And as I said, well-coached. So, I think you have to match that with an aggressiveness nature that you're going to compete at the highest level. We've got to play extremely well in the kicking game. We've got to try to blend some phases. I mean, that's when we're at our best. We get a stop on defense, we need to take advantage of it with our return game and take advantage of it offensively. That's how you get started in games and make yourself competitive. And that's always something that we're focused on. Again, part of that is you got to create some of this with being aggressive."