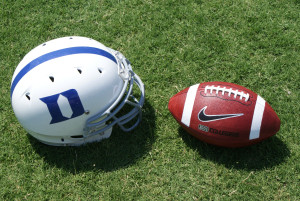 Duke walloped Charlotte a season ago on Halloween eve and that was the last time the program won a game. The Blue Devils ran out to a 24-0 lead with their ground game leading the way. After being thumped in that contest many think the 49ers have their hearts set on revenge in the season opener.

The 49ers have a revamped secondary and defense where they have several new starters. This will be the first time Charlotte has hosted a Division I team at home so you can expect a standing-room-only crowd to see if they can pull off the upset.

Charlotte is led by veteran quarterback Chris Reynalds who has a go-to receiver in Victor Tucker and both are pre-season all-conference selections.

All eyes on Gunnar Holmberg

The last time Gunnar Holmberg started a football game was in a high school not too far down the road from Durham in Wake Forest, N.C. That was 2017. He has yet to throw a touchdown pass or tested himself at the collegiate level. Should he struggle Duke could too. Having been named a team captain Holmberg has earned the staff's trust but can he manage an entire game behind center in his first outing?

A big part of the gameplan

Expect Duke to try and establish their run game early and they will stick with it if the 49ers cannot stack the front which will likely be their intent.

If this happens Gunnar Holmberg who will be the fourth opening-day starting quarterback for Duke in as many seasons will need success through the air.

There are a lot of things to watch for on Friday including the play-calling responsibilities where Requan Boyette and Jeff Farris take over the duties for Duke as Cutcliffe returns to managing the team on the whole.

If the Duke signal caller struggles and Duke cannot run the ball effectively there could be an upset where the 49ers are a mere 6.5 point underdog. And this is where the Duke defense has to help. Of course, said defense hopes the offense does not turn the ball over the record-setting pace of a year ago.

The Blue Devils need to discover some playmakers on the offensive end this season to have sustained success. Especially since the defense is thin in the front.

The good news for Duke is the special teams look solid with Porter Wilson and Charlie Ham are seasoned veterans. That is one area of the game where it was clear David Cutcliffe felt most confident in his Monday talk with the media.

Duke is going to get a good effort from Charlotte and they'll need to be on top of things and remain aggressive through adversity. A lot of intangibles can come into play if Duke does not execute out of the gate. If the 49ers hang around early, this game could be closer than some might think.

Should Duke come away from the opener with anything other than a win; it'll be a long season. But the real pressure will be seeing if they can clean things up from a season ago by not turning the ball over. The Blue Devils will also look to get back to winning habits and solidify the program's foundation in what looks to be a rebuilding season.