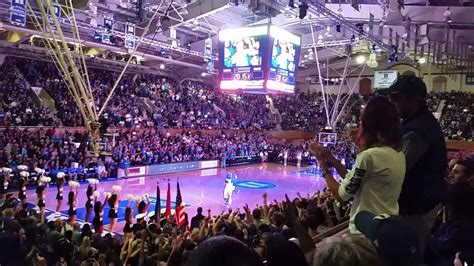 Considering that the ball is yet to be thrown up at tipoff the last thing anybody wants to hear is that AJ Griffin had suffered an injury to his knee in practice.

According to Mike Krzyzewski, it is a sprain and that is all the details we have at this time. However, the implications are that he will miss some games and that the staff will be extra cautious with him early in the year.

Griffin is already coming off a knee injury that sidelined him a year ago and yes, that was his knee. But there is no reason to think this might be any worse than has been mentioned already.

With an injury, depth comes into question

The Blue Devils roster is not the deepest it has been for the upcoming season. With the injury to Griffin, this comes into focus where Duke will need some guys to step up.

The hope was that a shorter roster would define roles and thus create better chemistry. It can happen that way but one injury can alter the dynamics in this situation as well.

One would think the starters are Mark Williams, Paolo Banchero, Jeremy Roach, Wendell Moore, Theo John and Trevor Keels with Griffin sidelined indefinitely. Okay, I know. That is six players but the point is that lineups will be altered due to matchups.

The next guys in line are the ones who will take on a larger role, Among them is Joey Baker, one of the team's older players and one who is expected to knock down any open look. I think we will see a rush to prep Jaylen Blakes now for past him Duke has five walk-ons. While those walk-ons are much peskier than some may think, it is hard to see them making a major impact on game day.

The one thing Duke may do all season long is walk on eggshells a bit where possible injuries can occur. And that means every player on the roster will need to pull their weight and be willing to play an expanded role.

I am more of a glass half full guy so I am thinking all will be fine with Griffin over time. But with him already coming back from an injury the news is concerning for everyone who wants Coach K to have a full roster available for his last season.

You will hear a lot more on Duke basketball and the ACC in general for media day takes place in Charlotte, N.C. tomorrow. You can watch some of it via the ACC Network via ESPN. Be sure to follow @bluedevilnation on Twitter for updates from the Duke perspective.

It will take place on October the 15th and start at 7:00. Masks are required in Cameron this season. I am not a huge fan of them but glad the show is going on and will adhere as should the fanbase. I am encouraged that there have been large football crowds around the country and few issues and hope the trend continues. Duke has about as good of a setup as they can with restrictions in place.

Am I the only one a tad worried about...

Cameron. With the students having a year away one wonders if they will be on top of things or show some rust. Having seen all the tent city folks over the years who site behind me, skipping a year could have an effect. And there were times when some did not show up for certain games. The point is people are really seeking tickets and Cameron should be packed for Coach K's last ride and I am sure someone knows to finetune the logistics to make this happen.

Yes, Duke is still in this recruiting race but so are the other schools on his list. I have covered recruiting a long time and Duke has never had success with City Rocks players from the Nike circuit. Of course, they have not offered that many, but most of them have always had Syracuse high on their list which is natural with them being from that region of the country. Their players are always fundamentally sound and that is but one of many reasons the staff wants this kid to take notice that they covet him. Starling has only seen his stock rise and will make a decision fairly soon.

A Note on Football

One has to feel for David Cutcliffe and the program for they lost a game against Georgia Tech that they had in their hands. Even Cutcliffe sounded dismayed blaming himself after the loss. So many things went wrong and that reminds people of what life was like before he took over where Duke found many ways to lose a game. Duke is an underdog in every game moving forward and that will make for a long season.

I honestly saw a lot of improvement against the Yellow Jackets, but letting up untimely big plays, terrible 2nd down calls which led to long 3rd downs, yips in the kicking game, the inability to gain a yard on going for it on 4th down and the list goes on will not allow them to flip this thing anytime soon.