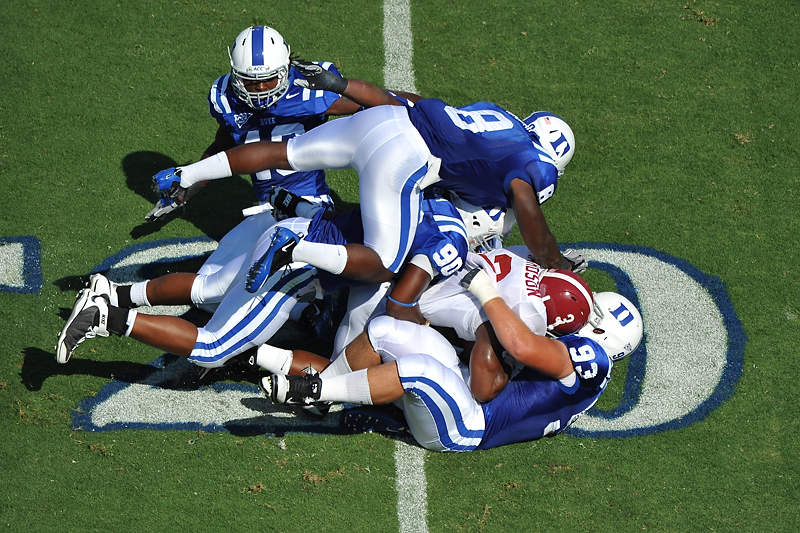 March Madness is in full swing as Duke takes the court tonight in the ACC quarterfinals against Maryland. Is it just us, or do you also find that the weeks in March go a lot faster than the rest of the year? It probably has something to do with conference tournaments streaming on television and online nearly 24 hours a day. While productivity in offices and schools across the country plummets, we’re as busy as ever at BDN. There’s no better time to join BDN premium than March, as Mark Watson follows the Blue Devils every step of the way in their quest for ACC and NCAA championships. Now that we’ve got you hyped for basketball, here’s this week’s Football Friday. [private]

Welcome back, loyal readers. And I do mean loyal. If you’re reading a Football Friday column in the middle of the ACC tournament, well, it doesn’t get much more loyal than that. Mille grazie. Yes, Cacchio is an Italian name.

Duke is on spring break

Ah, spring break. Fond memories, right? Where did the time go? Anyway, the Duke football team is off this week for spring break, and many of the players are taking advantage in warm, sunny locations, from South Beach to the Caribbean all the way to the California coast. Personally, I think they’ve earned it, from the early morning February practices to the late-night November film sessions. Student-athletes miss out on many aspects of the typical college experience due to their extracurricular commitments, but this week, the Duke football team gets to join in the revelry. Safe travels to all and we all look forward to getting back to work on Wednesday morning.

Miami and Clemson hit the field for spring practice this week. Both programs

have question marks at the quarterback position, where Clemson will be breaking in first-year starter Tajh Boyd, while Miami appears to have a true QB controversy on their hands. New Head Coach Al Golden ruffled some feathers with his spring depth chart, placing many of last year’s starters near the bottom in an effort to challenge his team this spring. Most surprising may have been at the QB position, where he placed rising senior Spencer Whipple ahead of last year’s starters Jacory Harris and Stephen Morris. Next week, spring practice will kick off at Boston College, NC State, Wake Forest, Virginia, and North Carolina.

Speaking of the Tar Heels…

While many in Chapel Hill may still be in denial, we’re all aware that there have been some issues with the Tar Heel football program. Unfortunately NCAA violations are more common than we would like to think in college sports today (see Auburn, Baylor, Ohio State, Tennessee, USC, etc.), but I think there may be an even bigger issue here, and that is the double standard that appears to exist for coaches and players. Ohio State players are suspended for five games, while Jim Tressel is suspended for two. UNC players are held out of several games, some for the entire season, while the coaching staff denies accountability.

This double standard doesn’t only arise when NCAA violations are uncovered. Coaches are allowed to up and leave programs without penalty, while players must go through a tedious transfer process and are usually required to sit out an entire year. A perfect example is the revolving door that has been the UNC Defensive Line Coach for the past few months. John Blake, implicated in the Gary Wichard scandal, resigned in September. Charlie Coiner was appointed to replace Blake, but was then replaced by Brian Baker in January. Baker worked to make sure UNC was able to sign top defensive line prospects Devonte Brown, Delvon Simmons, Shawn Underwood,  and Sylvester Williams (who enrolled in January)  in their class of 2011. Just after National Signing Day, Baker left the Tar Heels for a position with the Dallas Cowboys. UNC has since brought in Joe Robinson from LSU, giving them a total of four DL coaches since the start of the 2010 season. Now, top recruit Delvon Simmons has asked for his release from his letter of intent, and there appears to be some controversy. While the coaches were able to leave without penalty, Simmons must wait to hear whether UNC will grant him a full release, a conditional release, or hold him to his letter of intent. The situation is puzzling, even for the wild world of football recruiting. For starters, Simmons never took an official visit to Chapel Hill and did not have an in-home visit with the Tar Heel coaches. Stay tuned. The bottom line is that these coaches should be held to the same commitments and standards as their players.

Duke will graduate another group of outstanding seniors this year, as the

program continues to build on the field while maintaining the program’s tradition of academic excellence. NFL scouts will be on hand in Wallace Wade Stadium on March 22 to take in workouts of Blue Devil seniors. Duke graduates 19 letterman this year, including starters Patrick Egboh, Brandon Harper, Brett Huffman, Austin Kelly, Brandon King, Abraham Kromah, Wes Oglesby, Chris Rwabukamba, and Damian Thornton. Best of luck to all the Duke seniors as they pursue careers in football and other fields!

Recruiting slowly starting to pick up

Over the past week or so, recruiting has started to heat up around the country, as players and coaches assess each other’s interest. Duke hosted two junior days and entertained well over 100 recruits from the class of 2012; a few other prospects have visited Durham to take in spring practice. A handful of Duke prospects have already pledged their verbal commitments to rival ACC schools, including LB Sha’Keel Rashad to UNC, OL Mike Madaras to Maryland, QB Gray Crow to Miami, and OL Joel Suggs to Wake Forest. Hooker and Madaras both held verbal offers from Duke. The Blue Devil staff will keep an eye on these prospects, as decommitments are all too common in college football recruiting, but will focus their efforts on hundreds of other prospects, trying to find the best players for the Duke program.

The next big recruiting milestone for the Blue Devils will come on March 26, as the program hosts a number of prospects for their spring game, which is set for a 3 PM kickoff. We’ll have a full list of attendees as we get closer, but BDN has already learned that California LB Deion Williams will fly in for the weekend. Williams holds a Duke offer and is very high on the Blue Devils early in his recruitment. It’s important to note that all of these spring visits are unofficial visits, meaning that prospects must pay for their own expenses. It’s a sign of serious interest that players like Bart Houston and Deion Williams are making the trip across the country to learn more about the Duke program. I expect Duke’s recruiting to really take off in June, as Duke will host a series of camps for high school players, including Coach Cutcliffe’s QB College, which will allow the Duke coaches to evaluate prospects firsthand.

Thanks again for reading. Please feel free to join in on our football message board; we welcome Duke football fans of all opinions, shapes, and sizes. Until next week, you may now return to March Madness. Show your Duke pride and support the Blue Devils as they begin their championship quest tonight in Greensboro. We are Duke!