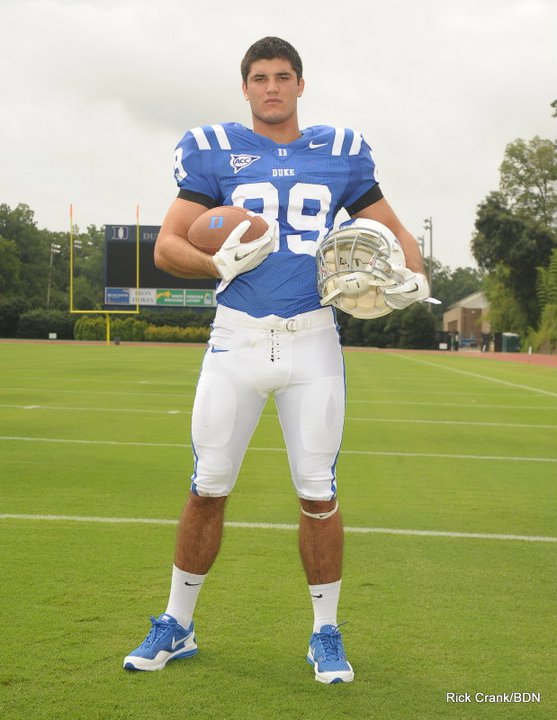 Blue Devil Nation was on hand for today's football press conference where we talked with Sean Renfree and Braxton Deaver. Check out what they had to say voa BDN Video -

DURHAM - Duke Quarterback Sean Renfree hopes to build on his steller performance against Navy when Virginia visits Wallace Wade Stadium this weekend.  BDN caught up to Sean during this weeks media day and got his thoughts on the upcoming game and more -

The senior post tandem of Brian Zoubek and Lance Thomas combined for 12 points and 21 rebounds in the win. Zoubek recorded his third double-double of the season with 10 points and 11 rebounds, while Thomas grabbed 10 boards, including six offensive rebounds.

Duke posted a 47-37 edge on the glass and finished with 18 offensive rebounds. The Blue Devils have now grabbed 17 or more offensive caroms in five straight games.

Jon Scheyer reached double figures for the 27th time this season with 15 points. He went 3-of-5 from three-point distance and now has an ACC-high 79 three-point field goals. Scheyer also had four rebounds and three assists in the contest.

l The Blue Devils are holding the opposition to an ACC-low 27.0 percent (106-of-393) shooting from three-point range. Duke is allowing just 3.8 three-point field goals per game and has limited its opponents to three or fewer three-pointers in 13 games.

l Duke leads the ACC with +6.5 rebound margin as Kyle Singler, Brian Zoubek, Miles Plumlee and Lance Thomas are each averaging 5.0 rebounds per game or better for the season. The 2000-01 Blue Devils are the only team to accomplish that feat under Mike Krzyzewski.

l Brian Zoubek is averaging 9.8 points and 12.3 rebounds (6.0 orpg.) since joining the starting lineup four games ago. He is second in the ACC in offensive rebounds (3.5 orpg) and ranks 13th in total rebounds (7.0 rpg.), while playing 16.7 minutes per game. Zoubek ranks among the national leaders with 16.8 rebounds, including 8.4 offensive boards, per 40 minutes played.

l Nolan Smith has scored 466 points this season after recording 487 points in his first two years as a Blue Devils. He is 47 points shy of becoming the 60th player in Duke history to score 1,000 career points.

#30 Jon Scheyer - 20+ points in five of the last nine games ... ranks in the top 10 of the ACC in eight statistical categories ... leads the league in minutes, free throw percentage, three-point field goals and assist-to-turnover ratio ... second in the ACC with 13 games with 20 or more points ... three-time ACC Player of the Week