A new name making the rounds in recruiting circles is Monterzl Harrell [class of 2012, 6-7 North Edgecombe Magnet, Tarboro, N.C.]  a sturdily built kid who went toe to toe with J.P. Tokoto and touched his team for 29 points, including the best dunk I saw in the tournament.  Harrell went air born and thrust one down with power from the baseline this past Friday evening in the Dean Dome.  By my unofficial count, he blocked 5 shots in the game as well and by games end all who were witnessing were talking of him. BDN caught up to Harrell after learning that Duke [private] Assistant Coach Nate James had attended one of his practices a few weeks back.  Here is the skinny on Harrell -

Durham, N.C. - BDN is on the scene this weekend to bring you coverage not only of the TOC, but the Nike EYBL session 3 in Los Angeles.  Look for some great offerings as the week goes on as we begin to churn out information from a busy holiday weekend.  One of the highlights of this weekend's Tournament of Champions event is the play of Shabazz Muhammad, a Las Vegas native with all the tools for success. During yesterday's event Muhammad dazzled the crowd at the Wilson Rec Center on the Duke campus with his play.  After starting slowly, Muhammad warmed up for 30 points on a jump shots and slashing drives.  More impressive is the fact that he plays both ends of the floor well where I counted four blocked shots from his wing  position.  Muhammad glowed when Duke was mentioned after this game as you will hear in this [private] audio -

The New Jersey Roadrunners coach, Sandy Pyonin has coached some terrific players over the years and Duke

prospect Kyrie Irving is the latest.  Pyonin, one of the best AAU coaches in America, worked with former Duke players Bobby Hurley and Jason Williams.

Irving is a 6-2 guard prospect who plays his high school basketball for traditional power St. Patrick's in New Jersey.  The young star has been climbing every recruiting guru's list for the past several months.  Irving clearly established himself as a top tier player with his body of work during the Tournament of Champions this past weekend.

Irving put on a show in Cameron Indoor Stadium on Saturday, where he scored 40 points, going 12 of 17 from the field while hitting 4 of 4 from the three point stripe.  He was coming off a 23 point, 7 assist performance the night before at the Dean Dome.

Most of the recruiting types missed his Cameron performance that I was fortunate enough to catch.  By the time I traveled back to Chapel Hill during this marathon AAU event, the buzz was apparent.  Everybody was talking about Irving and many bemoaning the fact they missed his best game.

Irving has become one of the Blue Devils' most important recruiting targets, but they will have some company for his services along the way. One fan held up a sign encouraging Irving to come to Duke, while another yelled "Kyrie Irving come to Duke."

BDN talked to Irving a couple of times this weekend, but it was the chat in Cameron where he opened up about the

recruiting process  even more.  During that interview, I couldn't help but notice the retired jerseys of #11 Bobby Hurley and #22 Jason Williams in the backdrop, wondering if his would one day hang there, too.

BDN Premium members will hear or read both interviews and comments from his coach this week.  BDNP has several interviews, pictures, scouting reports and tidbits from the weekend coming.

Scouting Report on Kyrie Irving - Irving has that rare inside and out game already established going into his senior season.  He has a sweet stroke from the three point stripe and hits the shot with consistency.  He rarely takes bad shots and almost always has his feet planted.  When the ball leaves his fingers he expects it to go in and one cannot help but notice how smooth he looks when releasing the ball.  It almost looks effortless for Iriving at times.  He has been called a tweener guard but, make no mistake, he can run the point with ease.  He gives that role up a lot on a team with little inside depth, but he threads the needle when going past the defense or into the lane.  His quickness allows him to get to the basket most any time he wants to.  He knows he is the man, so he baits the defense into double teams which frees up his teammates where he hits them on cuts.  He is an adept passer, especially when on a break.  He plays good on ball defense and stripped the ball four times in one game, scoring on the other end three of those times.  There were games where he got off balance from a bump or a slip on the slick floor, but he still made the play, recovering quickly.  Irving is not afraid to hit the floor and rises and flushes down dunks with ease.  Irving loves to find seams in the defense where he will take the ball to the rack.  Irvng is also an extension of the coach on the floor where he tells teammates how to space properly.  There are times when he looks unassuming, but he is always in the play and doesn't take a lot of breaks from being in the play at both ends of the court.

from the outside and a decent handle, but needs to play with more aggression.  He disappeared for several minutes at a time during three games I took in at the TOC.  Hood would put together a good half, only to score a bucket or less in the half.  He plays fairly good defense and can help out when teammates are beat to the rim.  There were two occasions where I saw him block what looked like easy lay ins from the side or behind the opponent.  He is a true wing player that will likely get better with seasoning.  He scored 23 points in a game I took in at the Boo Williams Invitational earlier in the AAU season.  Prep Stars has rated Hood around the 20th best player in his class at the moment.  With consistency, he can prove that rating valid for he has the tools necessary to become a good college player.

Rodney Hood! Tell me about your game?

I'm a competitor, I like to win and I do what it takes to win for my team.  I'm like a slasher and shooter and I like to get my teammates involved.

Did you have a dream school growing up?

It was Duke. [private]  When I was little I was a Duke fan back when Shane Battier was playing, but right now I really don't have one.

Is Duke actually recruiting you?

Yes sir.  I've been able to talk to Nate James.

So, you will play in Cameron this weekend?

Actually, we are suppose to play there tomorrow.

Who will you look to when you get serious about choosing a school?

My Mom and Dad.  My brother!  He used to beat me up on the court all the time.

Which schools are recruiting you?

How many of those schools have offered.  Pretty much all of them except for Duke.

Yes sir.  It would be a good accomplishment to get an offer from Duke.  I'm just playing hard trying to get better in the summer.

How would you describe your game to someone who had never seen you play?

A competitor, I always go hard and I like to win.  I can shoot, I can drive or pass it off.  I can do a lot of things.

I'll let you get to your next game, good luck! 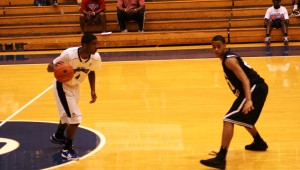 Kyrie Irving is not disappointing the fans in attendance at Cameron Indoor Stadium.  Irving has 28 points with 11:51 left in the second half and his team has a 45-30 lead.  Check out BlueDevilNation's Twitter page for updates throughout the weekend. We expect to have live audio blogs up before the day is out, which is a first for any Duke site.  This will be free throughout the TOC, but will be premium in the future.  BDN has secured interviews and scouting reports with a bevy of Duke targets.  It's a great time to join!

UPDATE: Click "Play" on the icon below to hear Mark's latest live podcast! 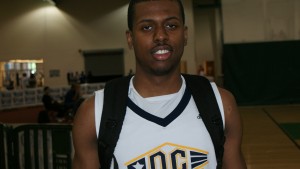 Check out our twitter page for updates throughout the weekend from the TOC.  Kyrie Irving is about to take to the court.