[private]I made it a point to ask about the progress of Sean Renfree during Tueday's press conference.  Cutcliffe had some good things to say about a future signal caller -

While Duke has two remaining contests left in the 2008 season, some fans like to look ahead a bit.  Not all of the Blue Devils progress can be measured on the field. 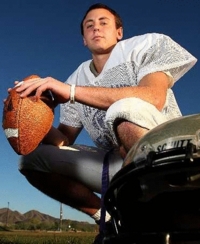 For instance, Coach Cutcliffe said that he would burn no more redshirts the remainder of this season.

While seven or so key freshman have been forced to play due to needs, the Devils will hold the rest out to give them an extra year to mature. Duke is quietly grooming what could be their quarterback of the future behind the scenes.

Sean Renfree chose Duke over Arizona State, Boise State, Georgia Tech and Oregon State last season.  He was one of the nation's elite quarterbacks and is the first one Cutcliffe and his staff targeted.

In fact, his mechanics somewhat resembles the Manning brothers, two highly successful, winning quarterbacks on each level.  The redshirt freshman is known for a quick release and more importantly accuracy and anticipating the wide outs routes.

"Sean had a good morning practice.  He's a very bright young man.  Redshirting can come very complacent to certain kids, but he's been 100% the other way - he's been very much into what he is doing," said Cutcliffe when I asked of Renfree's progress.

Renfree attended Notre Dame Prep in Arizona and the school prepared him for the academics at Duke.  He's adjusting on and off the field and may well earn playing time in 2009 which will be his first collegiate season.

Cutcliffe continued on Renfree's progress, "I've been real pleased with Sean.  He's throwing the ball well in practice.  We've increased his throwing.  He does all of our receiver drills.  He can really throw it and is working out a lot against the defense.  He's kind of a double dipper, people don't  know that this guy can really run."

Duke will no doubt concentrate on Virginia Tech and UNC to close the season, but it's comforting to know that recruiting continues to better team personnel and that Renfree is accepting of his current role to prepare for next season.