[private]What do you think of your performance against JMU?

I think it was okay.  There's always room for improvement after the first game.  The mistakes we 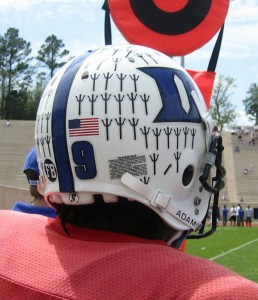 made in the James Madison game will need to be corrected.

Do you feel like last weeks performance helped further develop the fan base?

Definitely!  The fans stayed out there in the rain during an hour delay to see what Duke had to offer.  We came out there and performed to the best of our ability and tried to give them what they came to see.

You had two hook ups with Eron Riley for touchdowns.  Is it safe to say he is your main man?

Definitely!  There is something about Eron that you know if it is thrown his way, he's going to come up with it.  On the two touchdowns ... the first one I was kind of surprised to see him get in my vision and he never hit that route, but he kind of got there ... you know, it's just what the defense gave us.  He was open in that situation.   I have a feeling Coach wants to get him in position to get more catches than he actually had.  You'll see a lot more of that this year.

It seemed that play was designed to go another way ...

Yes.  It was a smash combination.  They covered Eron pretty well, but he got to the backside.  In that situation you have to use your eyes to work the cornerback either way.  As it so happens I was trying to look back this way to see if I could move him a little bit and Eron came in my vision.

What did you think about the Blue Devil Walk and the pre game festivities?

I thought that was great.  You know, just to see the fans, students, faculty and everybody cheering you on ... you don't always have that where you are use to getting off the bus and you are gone.  Just having that walk and getting a connection with the fans before you get out there on the football field and you feel as one.  The fans don't always get to see you up close and give you a handshake on a one on one basis like they did during the walk.

Is it safe to say that kind of thing made a difference in the teams play?

I can definitely say that the fan support makes a difference.  It's like the twelfth man on the field.  We need that extra boost on third and long offense or defense.  Just to get a win - that's going to make them come back and cheer you on again.

What are your thoughts going into the Northwestern game?

It's going to be a good game, it was last year.  They're a different football team, so we will definitely have to go out there and prepare well.  I'm pretty sure they are working hard.[/private]