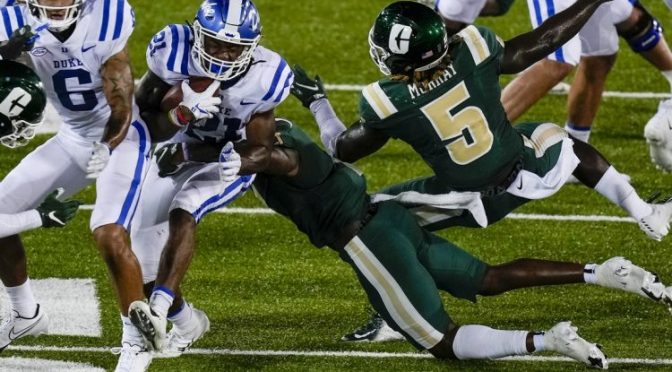 Those who cover Duke Football closely knew this season could be problematic. But many of them did not envision a loss in-state school Charlotte.

Duke football has been the brunt of many a joke over the years but David Cutcliffe halted that for a good long while taking Duke to bowl games.

Somehow, someway Duke has come full circle under Cutcliffe. They have returned oh-too close to the fragile program they once were in the ways of producing wins.

It is never a good sign when players who were slated to be stars this season elected to finish their college football careers elsewhere.

Losses like the one to Charlotte hinder recruiting as well, especially within the state. Duke is mired in a recruiting cycle which only brings in three-star or less talent with no occasional four stars of late.

That is fine if you develop the talent but that has not been happening. For instance, the last standout wideout Duke produced was Jamison Crowder and Duke is on its fourth starting quarterback in as many years which does not help.

It seems like when for example the defensive line gets shored up, a leak springs elsewhere. One leak is fixed and two more pop up. Rinse and repeat with other position groups. Coaches have been moved from position to position each season of late showing a lack of continuity and finding working solutions.

Nobody expected a winning season this year in Durham. Duke was picked dead last in the ACC's Coastal Division by everyone. But what some hoped to see was signs a rebuild could take place again and solidify the foundation of the program.

Last night's loss to Charlotte was anything but what one wanted to see. Somewhere along the line, the program got fat and happy with some success and now they are showing no immediate signs of maintaining progress or getting back to winning ways.

Conventional wisdom tells us that this was just one game. Some will say, teams, improve from week one to week two. Duke may well improve but the pace at which it is happening of late is depressing to the fanbase.

Duke committed a lot to upgrade football facilities and many had visions of Duke Football continuing to ascend at the time it happened. But what we have seen is the program go from south to north to south again under Cutcliffe.

A look around social media shows dismayed fans, people cracking jokes and the like. Duke just doesn't look like a team from the ACC right now and if they were not entrenched in a league this would be bad news in an ever-changing college athletics landscape.

Duke committed a single error in the loss but that is all it took to send this group to 0-1. But the maddening thing is has any player ever set a school rushing record only for his team to lose?

Watching the Duke defense not being able to disrupt any facet of the game was tough. Seeing Duke get outplayed badly to start the first and third quarters is a sign of a team not being ready to pounce. And watching the 49ers roll down the field like Alabama is haunting.

But for all the Blue Devils troubles on the field, there are areas of strength. The program graduates its players and there is a good character within the staff.

In some years, doing things right as this staff does would be enough. But in today's NIL world of changes, the Blue Devils suddenly seem rudderless or unprepared to step into the future.

The schedule in the coming weeks will allow Duke to compete and maybe garner some wins, but down the stretch, this team is not built to have success with the meat of the ACC schedule or maybe even compete.

Many were curious to see what Duke would look like last evening. What we got was a disjointed effort which points to a lack of continuity. This has been and likely will continue to be a problem for the ills are plentiful.