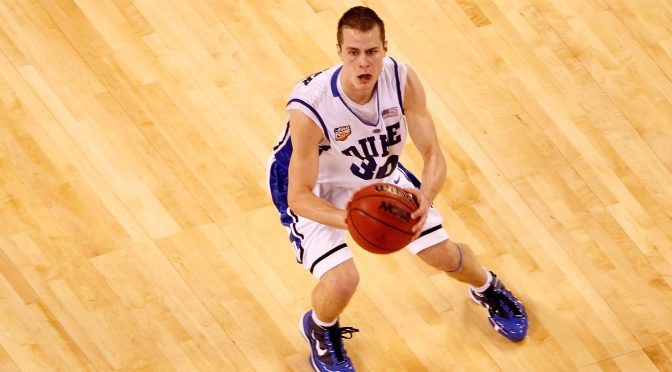 Over the years fans have fretted, argued and wildly speculated on who would one day replace legendary coach Mike Krzyzewski at Duke. For some of us covering the program, it became a running satire on how many take a crack at a prediction. It almost became distracting and made me personally wonder why people wanted to look ahead with a wildly successful career taking place.

At some point and time, Mike Krzyzewski had to retire. With a fast-paced and changing world throttled by COVID restrictions, Team K came to the realization the time was now. But that realization could not take place if there were not a viable replacement.

Behind closed doors, it was decided that former player and lead assistant Jon Scheyer had emerged as the top candidate. He had been Coach K's right-hand man for a few seasons and the decision was made that he would lead the post-K era for Duke Basketball.

The talk for years has been nobody in their right mind would want to replace Mike Krzyzewski. For those who did not live the entire K-era at Duke one needs to know it took a lot of work to build the program to where it sits today as a part of college basketball royalty.

Scheyer steps into a much different environment than Krzyzewski did. The program is well established. There will be no building just maintaining a high level of competitiveness. He also has a mentor close by in Krzyzewski, and a former teammate in the affable Nolan Smith on one side and a seasoned Chris Carrawell on the other making for immediate chemistry.

Many may not remember the top recruits did not always come to Duke. Krzyzewski was an unproven coach at Duke and he had multiple misses and growing pains before landing the class which would lead the program to a return to the national title game in 1986. What happened since that time is that the Blue Devils won five national titles.

Fast forward to 2021 and Mike Krzyzewski has prospects calling him to come to Duke. And Scheyer takes over when the iron is hot, a system is set and winning is the norm.

The first order of business for the regime at Duke is naturally recruiting. Early returns are sparkling as the Blue Devils landed combo guard Jaden Schutt to a verbal commitment last evening.

Schutt joins a couple of five-star prospects in Kyle Filipowski and Dariq Whitehead. That three-man class currently ranks atop the nation and the Blue Devils are not finished adding players for many spots could be open.

Krzyzewski could have only dreamed to have a class coming together from day one when he arrived at Duke. Scheyer has been handed a near-perfect situation when he takes the reigns after this season.

What we are seeing has been well thought out with concern for the timing of the pending change. Duke did a good job of keeping it all close to the vest as the decision Krzyzewski would retire earlier this summer.

We will all have to wait and see how Scheyer does in the X's and O's department which is an entirely separate discussion. But he has hit the trail running as they say and he did so when major adjustments were required in the process of recruiting.

Hitting the recruiting trail in 2021 is different than the early 1980s under Krzyzewski during his first season. The recruiting climate is even vastly different than a season ago. Scheyer and his staff of Nolan Smith and Chris Carrawell have adjusted well to the new era to date.

That adjustment included navigating restrictions in how coaches got to view prospects. Schedules changed, opportunities for viewing or having actual contact with kids were different. There has been a complete overhaul by shoe camps of late and the staff has adjusted accordingly leading to early success.

It was not that long ago that the fanbase just wanted to see a prospect verbally committed under Scheyer to get the ball rolling. A month or so later he has three in the bag while hotly pursuing others in the same class and beyond.

Duke has adjusted quickly to stabilize the program with Krzyzewski's last season approaching. This points to a team effort where Scheyer is surrounded by a young crew on and off the court that can grow with him.

Scheyer will benefit from a burgeoning new system in place around him and working together with new Athletic Director Nina King and the social media aspects in the NIL era. And thanks to his mentor Coach K he will have facilities and staffing designed to keep Duke Basketball running hot for years to come.

Only time will tell if the transition works but Scheyer is positioned to maintain excellence at Duke. Of course, when the ball is tipped off as he takes over the sidelines there is an altogether new pressure of strategy, in-game adjustments, and such.

There will in time be some growing pains for Duke trying to replace the winningest coach in history. But Scheyer is competitive and he will be allowed to grow into his role which the fanbase is looking forward to and his arrival on the recruiting trail is making the dreaded but inevitable transition from Krzyzewski tolerable to the fanbase.

Scheyer must now continue a balancing act of helping to prepare this year's talented team while always recruiting. Scheyer is young, hungry, and probably a little afraid to fail and that makes for constant work.

The one thing which is evident and it is gaining attention from the college basketball world is that Jon Scheyer is scoring some early wins on the recruiting trail.