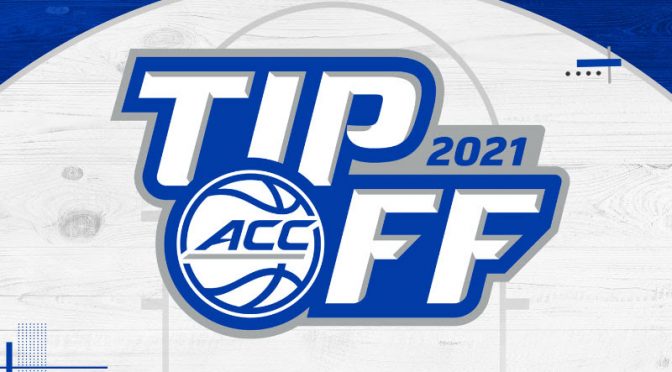 DURHAM – The Duke men's basketball team was selected as the favorite to win the 2021-22 Atlantic Coast Conference Championship, as chosen by media members at the ACC Tipoff.

Picked as the preseason ACC favorite for the seventh time in the last nine years, the Blue Devils received 47 first-place votes and 1,132 points overall in the media poll. Duke leads Florida State, North Carolina, Virginia and Virginia Tech atop the preseason poll.

Junior Wendell Moore Jr., and sophomore Mark Williams each earned a spot on the Preseason All-ACC Second Team, while Trevor Keels was second behind Banchero in Preseason Freshman of the Year voting.

A 6-10 forward, Banchero enters his freshman season as the No. 3 player in ESPN 100's rankings for the class of 2021. He averaged 22.6 points, 11.6 rebounds, 3.7 assists and 1.6 blocks per game in his junior campaign at O'Dea High School, winning the Washington Boys Basketball Gatorade Player of the Year award. Banchero participated in the USA Basketball Men's Junior National Team minicamp in July of 2019.

Moore heads into his junior season having started 29 of 49 games at Duke over the past two years. The Charlotte, N.C., native has averaged 8.6 points, 4.5 rebounds and 2.3 assists in his career and is a two-time All-ACC Academic Team selection. In the final 19 games of the 2020-21 season, he increased his scoring average to 11.2 points per game while shooting .454 from the field. Moore additionally received three votes on the Preseason Player of the Year ballot.

Williams tallied two votes for Preseason Player of the Year and looks to carry the momentum from a strong finish to his freshman season. He was a second-team All-ACC Tournament selection after averaging 18.0 points, 10.0 boards and shooting 15-of-21 (.714) over the Blue Devils' two wins in Greensboro in March. Over the final 14 games of last season, Williams led the team in rebounds (6.1), field goal percentage (.684) and blocked shots (28) while ranking fifth in scoring (10.8) in that stretch.