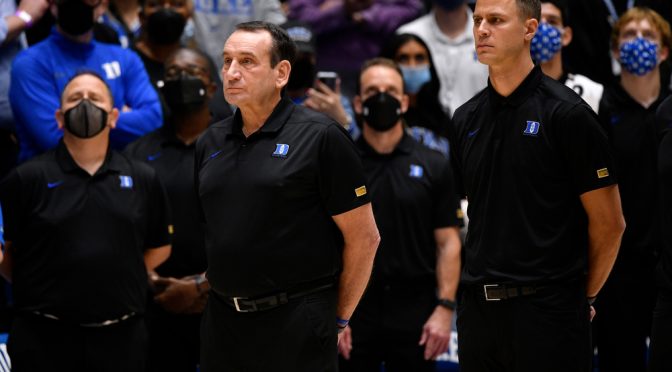 We are on the eve of the opening game of the college basketball season where Duke will take on Kentucky in Madison Square Garden during the annual Champions Classic. While Duke has been installed as a one-point favorite in Vegas, ESPN gives Kentucky a better than 62% chance to win via their matchup predictor.

Both of these proud programs struggled a season ago but each program is all but destined to return to normalcy where they are giants in the game. Kentucky is deep, experienced, and talented and they will look nothing like they did a season ago.

The Blue Devils have looked sharp early on where Coach Mike Krzyzewski entering his final season at the helm has his team looking ready for the challenges ahead.

We are almost assured of seeing a spirited game played in a legendary venue between heavyweights giving it their all to get off to a great start. And we will see Mike Krzyzewski take one more shot at winning it all, which if it happened would be his sixth national title at Duke.

What we will see all year long are coaches trying to beat the legend on his way out. While Krzyzewski will still be involved in many things basketball, this is the last shot for those facing him to garner a win and they will not hold back.

This will especially hold true for John Calipari where the program is still smarting from a beatdown given the last time the two clubs met. But these are two different teams and let me just say there will be no cakewalk this time around.

In watching Duke, we will see if they can translate early-season success that has not counted for a thing in the standings to a 1-0 mark to start the season.

In order for the Blue Devils to come out with a win, they must be ready for the ebbs and flows of the game which tips after 9:30 due to it always being the prime time event. It doesn't matter who you root for and an opener like Duke-Kentucky will bring a lot of eyes out from around the nation.

Paolo Banchero has gotten plenty of deserved hype, but can he get into the flow against a team that can stay in front of him defensively? So many questions but players are eager to answer the call.

On the other side of things, we will see TyTy Washington taking over the PG duties at Kentucky where he may drive a Porsche to practice from his new NIL deal.

And that is just two players on teams loaded with star potential. We will see some guys literally playing for endorsements in the new NIL era.

To win this game tomorrow night will take teamwork, toughness and not getting too pumped before tipoff happens.

I have seen Coach K at the helm since 1980 and the memories are many. I have seen him claw to the top from a time when people could not spell his name nor took the time to do so thinking it unworthy. Everybody knows his name now.

When I first heard the official news that Mike Krzyzewski would be retiring it knocked me back. I was never one to speculate on which coach would be next for that went on for fifteen years and got rather annoying to those who simply knew you should just enjoy the ride.

Once the retirement news was announced I just wanted to as a fan and homer media guy to simply wallow in his accomplishments via appreciation to have been along for the ride. But there are so many memories that it is overwhelming.

It took me a bit to get on the page Krzyzewski was already on. He refuses to talk about the past only concentrating on this season's team. And now, I am finally there as well hoping he has a well-deserved successful curtain call with what looks to be a special team.

Whether Duke wins the title this season or not, it should be a great journey to try and achieve that goal. And I think Mike just wants to give it his all - his best effort going out and win or lose that is more than enough.