DURHAM - Blue Devil Nation was on hand for Duke Football's preseason media day and spoke with Defensive Coordinator Jim Knowles about the new-look Blue Devil defense. It's no secret that the Duke defense struggled in 2010, but Coach Knowles feels the new 4-2-5 scheme better fits the Duke personnel. Under the leadership of Matt Daniels and Charlie Hatcher, the defensive unit is working hard and improving every day in training camp.

Since arriving at Duke in 2008, Coach David Cutcliffe has emphasized speed. One of his first comments on recruiting was, "We're going to start with people who can run." The 4-2-5 defense is flexible and emphasizes the use of speed. Simply stated, the defense removes a bigger player (linebacker) and replaces him with a faster player (safety). Of course it is actually a bit more complicated.

Football terminology can be confusing as the average fan attempts to determine exactly who are those linebackers named Mike, Will and Sam everyone keeps referring to and why the weak safety doesn’t spend more time in the weight room with the strong safety. Obviously, I’m just trying to be funny and probably not succeeding, but the point is I know how confusing the terminology can be due to the number of articles I read while preparing to draft this article.

Gary Patterson, the current head coach at Texas Christian University, and previous defensive coordinator at the University of New Mexico, has achieved much success with the 4-2-5 defense. In 2010, TCU finished the season 13-0 and defeated Wisconsin 21-19 in the Rose Bowl.

Patterson provides an in depth explanation of the 4-2-5 defense in this 1997 article written when he was the defensive coordinator at New Mexico.

The base defense uses eight men in the box to stop the run coupled with zone pass coverage such as the Cover 3. Achieving success with the 4-2-5 defense requires a team to commit to stopping the run first. Brian Billick explains the eight men in the box concept, on a white board with diagrams, in this video clip on You Tube.

Applying pressure via the blitz is the second objective. The defense is flexible and allows a team to bring pressure off the corners or inside without sacrificing pass coverage. The defense utilizes pressure to create turnovers.

Limiting big play opportunities is another feature. The use of five defensive backs makes it easier to disguise coverage and confuse the offense by showing blitz and zone coverage simultaneously.

To summarize: stop the run, pressure the quarterback, do not give up big plays, and force the offense to adjust.

The spread offense is prevalent in today's college football landscape and the 4-2-5 in conjunction with the Cover 3 Zone is well suited to stopping the spread. Therefore, it is important to understand the principles of the Cover 3 Zone.

The Cover 3 Zone splits the top of the field into three deep zones, which frees up the strong safety to provide run support on the tight end side of the offense. The Cover 3 Zone provides the defense with an extra man in the box to stop the opponent’s running game.

Between five and 14 yards from the line of scrimmage, where receivers run outs, curls, hooks and slants, the two inside linebackers and the strong and weak safety provide coverage support. This underneath support allows the cornerbacks to focus upon any receiver who goes 14 yards beyond the line of scrimmage between the hash marks and the sideline with the free safety responsible for the middle of the field.

For more on the Cover 3 Zone, this article at the Clemson Tigers blog “Shakin’ The Southland” provides some nice details.

While the Cover 3 Zone is effective in conjunction with the 4-2-5, it is not the only option. The defensive package will contain lots of blitz options with those options mixing up the accompanying coverage assignments. Cornerbacks with the ability to play man-to-man really open up the 4-2-5 defense’s flexibility.

There are innumerous blitz opportunities in the 4-2-5 scheme with the inside blitz and double edge blitz being two examples.

To execute the inside blitz, the two linebackers blitz while the strong side defensive end (tight end side of the line) checks the tight end while executing a run/pass read, if the defensive end reads pass, he drops into middle coverage with primary responsibility for the tight end.

The inside blitz is strong against an inside run (between the tackles) or play action pass play, but it is vulnerable to a quarterback who sprints out of the pocket to the strong side.

When the double edge blitz is called, the weak and strong safeties blitz and the two linebackers takeover responsibility for pass coverage in the flats with the nose guard dropping into middle coverage after checking the center and executing a run/pass read. The vulnerability area for this blitz is the flats, while the strength is containing a mobile quarterback.

For more details, go here, for verbiage with diagrams. Ah, a picture is worth a thousand words.

The Cover 2 Zone is effective against Pro Set two running back offenses. In the Cover 2, the strong safety and free safety are each responsible for half the field deep. The cornerbacks are responsible for the flats, and typically play the wide receivers bump and run. The Cover 2 Man is another variant where the underneath defenders play man-to-man.

The linebackers are responsible for the hook/curl zones. The Cover 2 is strong against short routes and timing routes, but can be exploited by crossing routes or by sending two receivers deep on the same side of the field.

For a more detailed analysis of the Cover 2 Zone, I’ll once again refer the reader to the “Shakin The Southland” website and this article plus this You Tube video or this You Tube video featuring Bill Billick. I guarantee this is good stuff so be sure and click on the links.

It is time to focus this article by discussing some Duke specific details. First, safety is the deepest position on Duke’s defensive roster, and Matt Daniels is the defensive leader so running a scheme which features the safety position passes the common sense test.

In 2010, Duke struggled to stop the run giving up 208 yards rushing per contest so a defense designed to stop the run first makes sense. The extra man in the box coupled with a blitz package oriented to stopping the run will prevent opponents from successfully running the ball straight up the middle play after play.

In 2010, Duke struggled to pressure the quarterback, recording only 12 sacks so a defense that includes multiple blitz packages and a commitment to applying pressure makes sense. Focusing upon pressuring the quarterback on pass plays will result in improved performance by the cornerbacks and free safety with the added benefit of increased interceptions.

Defensive Coordinator Jim Knowles possesses extensive knowledge and experience with the 4-2-5 so he will be able to teach the players how to execute the intricacies of the scheme.

The Blue Devils are poised to take a big step forward in the rebuilding process and that big step could include winning the requisite number of games to qualify for a bowl game. For Duke to become bowl eligible in 2011, the defense must step up and perform much better than they did in 2010.

To determine if the switch to the 4-2-5 defense is a successful move, fans need to view defensive statistics with a critical eye: rushing yards allowed, sacks by and turnover margin will be key indicators of whether or not the scheme is fulfilling expectations. 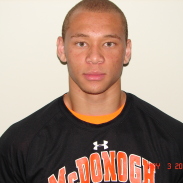 While Duke is working hard to improve their defense on the field this spring, the coaching staff is also working hard to upgrade the defense with a talented group of prospects in the class of 2012. Allen Jackson is a 6’5” 225 pound defensive end prospect from Owings Mills, Maryland. Playing defensive end and tight end for McDonogh High School, Allen earned All-Conference honors as a junior, and has already received offers from Duke, Maryland, Vanderbilt, and West Virginia. Highlights from Allen’s junior year can be viewed here.

Off-season, it’s just trying to be quicker off the ball, and trying to become stronger, and at the next level that’s going to be one of the things I’m going to continue to work on as well.

Senior year, I want to be all-state, I want to have at least 15 sacks in a year, I just want to dominate.

Definitely how I get along with the coaches, and how prestigious they are in their academics, and certainly how far they are from my family.

BDN: Who are the schools you have heard from the most so far? Who were the first schools to contact you?

Definitely Maryland was the first to contact me, and Duke as well, I’ve heard the most from them, but those were my first two scholarship offers, I’ve heard a lot from some some SEC schools, and a lot of the ACC schools as well.

I definitely plan to visit some more of the ACC schools along the coast in the upcoming months, and I also want to probably go down to Vanderbilt, and another SEC school or two.

Definitely Duke, with their academics, it’s a very high, prestigious school, and Duke is a school I can really see myself at.

Not at the moment, I’m just kind of going to take it as it flows in.

BDN: Thanks a lot, Allen, and best of luck to you.

Thank you. Certainly, certainly. You too. Bye.