NEWARK, N.J. - Duke's Austin Rivers was selected with the No. 10 overall pick in the first round by the New Orleans Hornets in Thursday's NBA Draft, while Miles Plumlee was taken with the No. 26 selection by the Indiana Pacers. Duke has now had two first round picks in each of the last two years and six times overall.

Rivers, who entered the draft following his freshman season at Duke, is the 17th Duke player selected in the NBA Draft Lottery, more than any other school in the nation since the system was put into place in 1985.

"I love New Orleans more than anything in my life right now," Rivers said to a group of reporters after being selected on Thursday. "Coach Monty Williams is a great coach. Anthony's coming. They have a great city. I'm looking forward to going there and working hard and helping out in the community and doing everything I can to help this organization win."

Rivers, a 6-4 guard from Winter Park, Fla., averaged a team-high 15.5 points per game to join Johnny Dawkins (1983) and Bill Sapp (1945) as the only players to lead the Blue Devils in scoring as freshmen. He scored in double-figures 30 times, with eight games with 20 or more points scored. He also averaged 3.4 rebounds, while finishing second on the team in assists (71) and steals (33) and third in three-point field goals (58).

He had his best scoring performances of the year on the biggest stage on Feb. 8 at North Carolina. Rivers posted a season-high 29 points and nailed a three-point field goal at the buzzer to give the Blue Devils an 85-84 win over the fifth-ranked Tar Heels. He went 9-of-16 from the field, including 6-of-10 from three-point range, and added five rebounds in the victory.

Rivers, the 2012 ACC Rookie of the Year, joined Corey Maggette (1999), Luol Deng (2004) and Kyrie Irving (2011) as Blue Devil freshmen to enter the NBA Draft after just one year of college basketball. The three previous freshmen early entrees were each selected among the first 13 players in their respective drafts, including Irving, who was the No. 1 overall pick in the 2011 NBA Draft.

Plumlee closed his four-year career at Duke with 650 points and 654 rebounds, while shooting 55.6 percent (262-of-471) from the field. He helped Duke to the 2010 NCAA Championship, three ACC Tournament titles and a 115-20 record during his four seasons in Durham.

In this clip from BDN Video, Coach K speaks of the NBA Draft and behind the scenes happenings with concern to Nolan Smith and Kyle Singler, 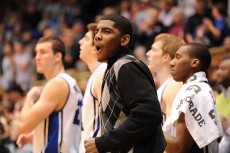 NEW JERSEY - Duke's Kyrie Irving was selected with the No. 1 overall pick in the first round by the Cleveland Cavaliers in Thursday's NBA Draft, while Nolan Smith and Kyle Singler were taken 21st and 33rd, respectively by the Portland Trail Blazers and Detroit Pistons. Irving, who entered the draft following his freshman season at Duke, becomes third Blue Devil tabbed with the No. 1 overall selection. "This is what I have worked so hard for and I am excited to start my NBA career with the Cleveland Cavaliers," said Irving. "I am thankful for the support of my family, friends and coaches and I am trying to enjoy every moment of this journey."  Irving, a 6-2 guard from West Orange, N.J., played in just 11 games last season, sitting out 26 contests with a toe injury on his right foot. He averaged 17.5 points, 3.4 rebounds and 4.3 assists per game while shooting .529 (55-of-104) from the field, .462 (18-of-39) from behind the three-point line and .901 (64-of-71) from the free throw line. Irving started the first eight games of the year, averaging 17.4 points, 3.8 rebounds and 5.1 assists per game during that time frame. He returned to action in the NCAA Tournament and averaged 17.7 points, 2.3 rebounds and 2.0 assists per game in Duke's three outings. He scored a game-high 31 points to go with six rebounds, four assists, two blocks and two steals against No. 6 Michigan State in the ACC/Big Ten Challenge. It was just the fourth time in school history a freshman scored 30 or more in a game. He was also selected the CBE Classic MVP after averaging 14.5 points, 4.0 rebounds, 6.0 assists and 1.5 steals in the four games.

With three players selected in the 2011 NBA Draft, including two first rounders, head coach Mike Krzyzewski has now mentored 43 draft selections. Duke has now produced 76 NBA draft picks overall. "Being selected in the NBA Draft is a dream come true," said Smith. "This is a special night for me and for my family. They have sacrificed a lot to help me reach my goals and my dreams. I am excited to have the opportunity to play for the Trail Blazers, set new goals and continue to work." Smith, the 2011 ACC Player of the Year and a consensus first team All-America, led the ACC in scoring (20.6 ppg.), 20-point games (21) and 30-point games (four) as a senior. He also ranked among the league leaders in field goal percentage, free throw percentage, assists and minutes played. Smith was also named ACC Tournament MVP after averaging 18.0 points, 2.0 rebounds, 6.0 assists and 1.0 steals per game in Duke's conference championship run. Smith averaged 13.4 points, 2.8 rebounds and 2.8 assists in 143 career games (including 97 starts). He ranks 17th all-time at Duke with 1,911 points and is the only player in school history to score over 1,500 career points after scoring less than 500 total points in his first two seasons combined. Smith's father, the late Derek Smith, played nine years in the NBA with the Golden State Warriors (1982-83), San Diego/Los Angeles Clippers (1983-86), Sacramento Kings (1986-1989), Philadelphia 76ers (1989-90) and Boston Celtics (1990). He also spent two seasons (1994-96) as an assistant coach with the Washington Bullets and was a second round pick (No. 35 overall) by the Golden State Warriors in the 1982 draft.

Singler, a second team All-America selection in 2011, ranked among the ACC leaders in scoring, rebounding, field goal percentage, free throw percentage, three-point field goals made and minutes played a year ago. He was also named to the ACC All-Tournament first team after averaging 17.7 points and 7.8 rebounds per game while helping Duke to its third straight ACC Championship. Singler averaged 16.2 points, 6.9 rebounds, 2.0 assists and 1.1 steals per game in his career and owns Duke career records for games played (148-tied), consecutive games played (148), games started (147) and minutes played (4,887). He led Duke to 125 victories to rank second all-time in ACC history and is just the fourth player at Duke and ninth player in ACC history to amass over 2,000 points and 1,000 rebounds in a career. Singler ranks fourth at Duke with 2,392 career points and sixth with 1,007 career rebounds. Duke Draft Notes * Irving joins Elton Brand and Art Heyman as the only Blue Devils selected with the No. 1 overall pick. Brand was taken with the top pick in the 1999 draft by the Chicago Bulls, while Heyman was selected No. 1 overall in 1963 by the New York Knicks. *