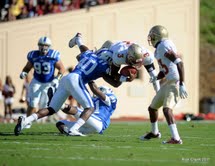 Coming into the game, I stated that if Duke went down two touchdowns early, that it would prove to be a long day.  As it turns put Florida State came out of the gate on fire and that allowed them a 17-3 1st quarter lead and that pretty much sealed the game.  Another 10 points in the 2nd quarter boosted the Noles lead to 27-3 and Duke went into half time with just 5 first downs.

Too much EJ Manuel

Manuel was throwing darts to his speedy wideouts and and the Duke secondary seemed a step slow to the ball all day long.  When the dust cleared, Manuel did a pretty good Cam Newton impersonation, going 9-14 through the air for 239 yards and two touchdowns.  He ran for another 81 yards and a score as well.  The Duke defense had no answer for his versatile style.

Florida State rolled up 242 yards rushing for a 5.4 average per carry.  Too many big plays on offense doomed the Blue Devils chances of an upset bid.  Devonta Freeman led the Noles with 109 yards and a score.

Duke played better in the second half

Once the Blue Devils settled down, they played Florida State even,  The offense which struggled to five first downs in the first hald, doubled that with ten in the second half.  Juwan Thompson scored on a 1 yard run while Sean Renfree hit Cooper Helfet for a 5 yard score.

Duke junior Desmond Scott rushed for 66 yards for a 6.6 yard per carry average and played major minutes as the starter.  However, he did make a critical fumble which stalled a drive.  Scott broke off the longest run from scrimmage of the day on both sides when he scampered 34 yards down the Duke sideline.

Will Snyderwine booted a 38 yard fied goal and everybody was happy to see that after some early seaon misses.  Punter Alex King averaged 53.2 yards per kick with a long of 60 yards.

With Donovan Varner injured, Cut wants youth to step up

We don't know how serious the injury is to Donovan Varner is but Coach Cutcliffe said in the post game that he needed Blair Holliday and Jamison Crowder to step up from this game forward.  The two young wideouts combined for two catches for a mere 10 yards.

The Blue Devil still seek their first win under Cutcliffe against a traditional ACC power, but they have a chance to beat a Wake Forest team next week that has owned them for a decade.  "We'll be ready next week, I'll guarantee you that," said Cutcliffe.

Who sent the memo that the game was canceled?  The worst student turnout of the year happened this past weekend and that with Duke riding a three game winning streak.  Hopefully, they will make it over for the Wake Forest game.