Our lastest Premium Update is up, formerly known as our General Update.  There are a few rumors floating about of late and while this site gets tired of setting them 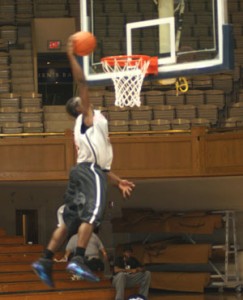 straight, we will attempt to clear the air on Ryan Kelly, Kenny Boynton, Jamil Wilson and Harrison Barnes.  Let's start with Kenny Boynton. [private] No decision has been made and he is expected to take all of his official visits.  While I'm sure Kenny enjoyed his visit to USC, the fact remains that Duke and Florida are running neck and neck down the stretch with teams like the aforementioned Trojans trying to sway his thinking.  Duke has put a lot of effort into Boynton and this will continue until he commits.  In fact, Duke will visit Kenny once a week until that decision which is the max allowed by NCAA rules.  Yes, this includes open gyms where the main players will all be in the stands.  Team Boynton has pretty much shut down any media contact of late, but that could change any day now.  He is still scheduled to visit Duke in his last visit.

While Ryan Kelly did visit Duke yesterday, he is not a solid Devil lean at this time.  In fact, Notre Dame is probably the slight leader.  Duke is in it and is one of two or three teams which are clearly at the top.  The Kelly family is said to be looking to go through the entire process, meaning they will think the decision through carefully.  Kelly took in some of the current Blue Devil players going through their workouts on Tuesday.

As I said earlier, Harrison Barnes has taken to Duke and wants to make an unofficial visit (tentative Va. Union game) if it is economically feasible for his family.  If he does come to Durham, he will have been to just two schools on unofficials, the other being Kansas during midnight madness.  Barnes has everybody in the country drooling and for good reason.  He is one heck of a player.  I will be adding the archives soon and suggest going back and read the earlier reports on him.  Our most recent interview is the most in depth you'll find anywhere on the web.

Finally, Jamil Wilson has not set up an official visit to Duke as has been reported by Scout, nor has 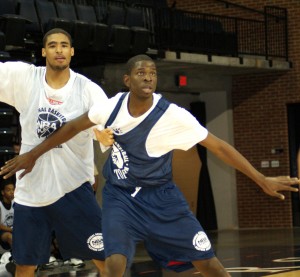 Duke pushed for one of late.  Duke will follow through with their plans which include Kelly and Boynton and if they miss, they'll revisit some other options which could then include Wilson.

While no firm dates are set at this time, the Duke staff will be visiting a lot of open practices in the coming days.

A reminder, the early basketball signing date is this November 12th through the 19th.  The final date is April 15th through May 20th in 2009. [/private]

Some sites have reported Jamil Wilson has stated he will not announce his college decision until 2009.  If that were true,  he might could  play his way into a scholarship offer over the next year.  If Duke had to make a choice today, I am of the opinion that Jamil would be on the outside looking in with concerns to a Blue Devil offer, but I am not privy enough to state that as a solid fact.

Wilson has been anything but consistent all summer (AAU season) long.  During the NBAPA Camp, he drained some threes or blocked key shots.  During the Peach Jam, Wilson grabbed one board, took the ball the length of the court and finished the play off with a driving lay in.  Any observer who saw certain plays would quickly recognize a budding star.

If one were to keep watching Wilson, they would see inconsistency.  Much like Daniel Orton, he plays very well in sequences only to get lost on the court making one wonder if they are watching the same player.

One of the things that bothered me during the Peach Jam was his not so emotional attitude.  It could have been sheer frustration, I mean, I'm not a psychologist.  Whatever it was, it just didn't seem positive or assertive.

Despite that, he would come out of nowhere to get a block or crash the board for a key rebound.  His offense simply wasn't there.  He scored just two points in one game and averaged around 8.5 for the tournament, his team going hime with a 2-3 record.

I had noticed one time when it looked as if he tweaked his ankle and subsequently talked to him about this and the recruiting process.  He mentioned that he had twisted his ankle a few weeks back and that it bothered him during the LeBron James Skills Academy, so I asked if he was still feeling the effects.  Wilson replied, "I came down wrong and kind of tweaked the ankle, but I'm fine.  I really try not to think about it, but I feel it's a lot better now."

I then wondered if he might be a bit tired from the wear and tear of the AAU season and asked him if the circuit was taking it's toll.  "Ummm, sort of, but I love the game, so it's okay."

In the previous game, he had put up a goose egg in the first half, but came back with 9 points in the second half.  "I really wasn't being assertive.  I wasn't looking for my shot in the first half.  I was trying to get out and get ahead and was working on rebounding.  I need to be more consistent," said Wilson.

When I told him he was tied for the lead at the camp in blocks after three games, he did light up.  "You got to play defense too, that's the way I see it," said Wilson.  I then took the opportunity to ask him if he had noticed coaches in the stand that were recruiting him.  "I didn't really pay a lot of attention, but sometimes on dead balls, I'd look up and see them.  It's not like I was trying to pick them out though saying here is a coach who is recruiting me.

Many at the event said Michigan State was the team to beat for Wilson and Tom Izzo and an assistant were present at three of his games.  I asked him if this were true and Wilson responded, "I think every team is the leader.  I'm wide open.  I haven't put Michigan State on the top of my list."

Several coaches were seen during his play, Marquette had two assistants around at all times, Wisconsin was low key, but they were there and several smaller schools from the Wisconsin are watched, as well as Northwestern and Coach Wojociechowski from Duke.

Wilson seemed more open than ever which surprised me.  Perhaps he was playing it safe with his comments.  He still lists Duke, Wisconsin, Marquette and Michigan State, but added Texas.  "The end of summer," said Wilson when asked when he wanted to make his collegiate choice.

That certainly differs with what other sites are reporting and he told me this in a clear manner.  My reaction was that's not long, so I asked how he could make a decision that soon. "Because I've been thinking and chipping away at it and my Dad has been doing the same.  So, by the end of Summer, we should be able to release something."

Of the schools listed, Wilson has yet to see Texas or Michigan State.  Take that for what it's worth.  I couldn't help but ask again about the original take that he would not go out of state to college.  "That was mainly my sister, but Dad and sister want me to go off and experience life as a young man.  People can say things, but if I don't say it, it's a rumor."

Nobody can say that Wilson is a selfish player and if he harnesses his skill set, he will be a solid player at the next level.  To his credit, he volunteered to work on the extra drills at the NBAPA Camp while most of the players elected to kick back and rest.[/private]

Coach K addressed the media today and mentioned that he would hit the road with his staff in early July.  The exact date is July the 6th, which is Sunday.  Former Coach Johnny Dawkins will serve with Team USA.  Coach also mentioned that they try to recruit certain one and done type of kids and that he favored allowing talented kids go straight to the pros.  He mentioned he preferred a two and one or two year commitment as well.

[private]Duke kicks it off at the LeBron James Skills Academy in Akron, Ohio where Coach K and Wojo will cover Jamil Wilson who we interviewed just days ago, Harrison Barnes whose interview will be up tomorrow and Jason Morris, our latest premium offering.   They will of course check out Andre Dawkins our first commitment in the class of 2010.

Coach Collins will be solo at the Adidas Tournament in Cincy.  There he will see Josh Hairston who BDN has made it clear we think will be a Dukie and Nate Lubick who we interviewed last week.  He will also see Josh Smith, 2010 PG Tyler Thornton who visited Duke unofficially just a short time ago and Ray McCallum.

Around July the 8th, Coach K will go to the Reebok event where he will watch Kenny Boynton, Brandon Knight, Terrell Vinson and Nick Russell.

Before Adidas, Collins will be solo at the Adidas event in Cincy.  There he will watch Josh Hairston, who I have told you will commit to Duke unless something goes really wrong.  Add Nate Lubick who I interviewed recently for BDN Premium, Tyler Thornton who visited Duke last week unofficially, Josh Smith and Ray McCallam.

Meanwhile, Chris Collins will head to Miami with Coach K where they will take in Team Breakdown's Annual Tournament.  He will of course be watching Kenny Boynton and Brandon Knight.  Oh, and don't pay too much attention to how Kenny responded to the Duke question in the link I provided.  I want it out there that Duke is not the leader from his mouth.  The reason being, the media can pick at Duke by asking him this question.  That's the same thing that happened in the Monroe recruitment.  He may well have gotten tired of the Duke leads questions.  If the media gets wind of this statement, then this constant question will be defused.  I mean Kendall Marshall's unscrupulous Father used this to annoy Kenny during the NBAPA Camp.

Then Duke will be represented at the Triple S Harley Jamfest- in West Virginia.  Hairston and Thornton will participate in this event.  The open period for coaches ends on this weekend and then they return to duties in Vegas with Team USA.

Duke will install their new scoreboard in Cameron Indoor Stadium in August.  All of the men's team is currently on campus and playing pick up together with the exception of Henderson and Zoubs.  Their injuries are healing as expected and they are on schedule.  Our next interview is with the hot prospect, Harrison Barnes.  Keep the names here, folks!  No hints out there please.[/private]