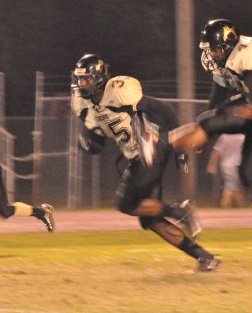 While Duke worked hard to improve their defense on the field this spring, the coaching staff is also working hard to upgrade the defense with a talented group of prospects in the class of 2012. The Duke staff has targeted a small group of defensive backs who already have received verbal scholarship offers from the Blue Devils, and a few have also taken a visit to Durham this spring. One of the most recent prospects to pick up a verbal scholarship offer is Ronald Geohaghan, a 6’1” 190 pound prospect from Allendale, South Carolina. In addition to his football talents, Geohaghan is one of the top long jumpers in the country and has worked his way back from a meniscal tear during his sophomore year at Allendale-Fairfax HS. Highlights from his junior season can be viewed here.

You know, some of my strengths right now, I guess, you could say crunch time leadership, and also one of my strengths is I love being the first one to the ball.  I also have my nose to the ball, also, which is the same thing as being first to the ball.  I also like to watch game tapes on all of our opponents, three or four days before we play them on Friday.  I also like to get two copies of a game of our opponent on a Sunday and then just watch throughout the week.

I really want to be attending some combines ‘cause the offers are kinda rolling in and just probably attend like two or three camps, to work on my techniques, just keeping a low center of gravity because I’m a tall defensive back.

First off, academics.  That’s most important anywhere that I’ll be signing and commiting, and second off, the coaching staff, and third, the players.  And just – I mean, I think it’s most important with the grades and the players and the coaching staff because these are people that I’m going to be spending the next four years of my life with, guidance.  I’m gonna have to create a chemistry so that we can win a lot of games and hopefully play a national championship.

BDN: You mentioned you were able to visit Duke a couple times. How have those visits gone and what other schools have you had a chance to visit so far?

I had a chance to visit Georgia Tech, Clemson, and University of South Carolina, and I’m also gonna be visiting Duke and NC State, I think at the end of this month [March].

Right now, I don’t really want to make a fast decision because I mean, Clemson was one of my favorite schools at the beginning which is sending me my first verbal offer, but I just want to take my time and see what most of the other schools have to offer, because most of the guys that commit early, most of the schools just back off them after they commit.  So I just want to take my time and enjoy the recruiting process and see what each school has to offer academically and athletically.

Well, my freshman year I was ranked as the Number 2 long jumper in my class of 2012, and I kinda had a ACL meniscus injury in my sophomore year early in track season so I missed a lot of track and football, which kinda made me take a step back and also the recruiters ‘cause I was sposed to be expecting some early offers, but they kinda took a step back to see how I was gonna rehab and recovery.  The recovery and rehab was very successful.  I sat out six months, and I missed the first three games of the season, and I also made third team All-State.  And I was also invited to try out for the 2011 USA World Team trials in Myrtle Beach, and if I make the top 10 in long jump, I’ll be competing in the World Youth Games in France this summer in July.

BDN: Thanks a lot, Ronald, and best of luck to you.