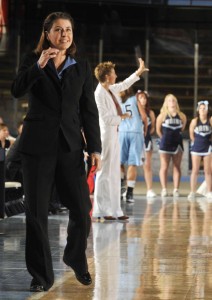 Orono, Maine - Joanne P. McCallie's return to Maine was full of turnovers and pressure. Just the way she likes it.

Karima Christmas and Bridgette Mitchell each scored 16 points and No. 8 Duke cruised past Maine 75-34 on Monday night, giving coach McCallie a victory in her return to Alfond Arena.

"We're a pressure team, an up-tempo team," McCallie said. "We're going to use every aspect of our team to our advantage."

Before the game, McCallie received a standing ovation from the crowd of more than 3,700 and was lauded for her time with the Black Bears, an eight-year stretch highlighted by six straight NCAA tournament appearances (1995-00), four conference crowns and a 167-73 record.

"I liked that our team came out ready, in attack mode," Blodgett said. "There were some things that we can certainly build on, and I liked the way we fought."