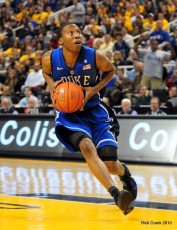 Any worries that Duke would have a let down against Miami were unfounded for these Blue Devils used a workmanlike team effort to defeat the Hurricanes  81-71  on Sunday evening.  Duke had to play without Nolan Smith for a big portion of the first half but once again Seth Curry stepped up and the rest of the Blue Devils helped Duke keep a small but working lead in the first half.

Smith's injury cast a shadow of adversity over the game, but his teammates held up, actually outscoring the home Hurricanes by 2 points in his absence.  Towards the end of the half, the ACC's leading scorer returned to the game after going to the locker room having nursed a scratched eyeball and he'd go on the lead the Blue Devils with 18 points.

The aforementioned Curry put together another fine game as well, scoring 16 points while grabbing 4 rebounds from the guard spot.  Currys improved on ball defense showed again as he had a team high 5 steals.  Senior Kyle Singler added 14 points to go with his 7 rebounds and 3 assists but the most pleasant surprise may have been the collective play of their three bigs.

Ryan Kelly, Mason and Miles Plumlee knocked down 11 of 16 shots collectively which translated into 27 points.  The Plumlee's grabbed 10 rebounds between them and Kelly and [Mason} Plumlee dished 7 assists.  It was a solid effort from all three players making this very much a team win.

The most impressive stat was a mere 9 turnovers and that of course meant that Duke protected the ball.  In fact, they allowed just three steals for their opponent and that is what you want on the road as far south as one can go in ACC play.

With the win Duke is 10-1 in the ACC and 23-2 overall.  They travel to Virginia this coming Wednesday evening in a 7:00 tip off in a game telecast by ESPN 2.

Sophomore Mason Plumlee recorded his eighth game this season with at least 10 points. He was 5-of-7 from the field.