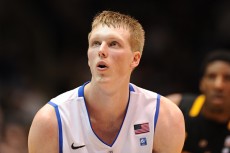 • The game is being televised locally by the ACC Network with Tim Brando (play-by-play) and Mike Gminski (analyst) calling the action.

• The game is being televised nationally by ESPN with Dan Shulman (play-by-play), Dick Vitale (analyst) and Erin Andrews (sideline) calling the action.

• Duke has won 39 of the last 42 games entering Wednesday’s game with North Carolina. The Blue Devils have won 12 of 13 contests against ACC opponents in that span.

• Wednesday’s game marks the 230th meeting in the all-time series. • The Blue Devils are 39-34 against North Carolina at Cameron Indoor Stadium.

Duke has only lost two home games in the past four seasons, posting a record of 61-2 in Cameron Indoor Stadium during that span. The Blue Devils have won 15 straight home games against ACC opponents.

The Blue Devils have had at least one player score 20 or more points in 18 straight games. Duke has had two players top the 20-point mark eight times this season.

Duke has won 26 consecutive games in the state of North Carolina. The Blue Devils’ last loss in the state was at N.C. State on Jan. 20, 2010. l Nolan Smith is attempting to become the first player in ACC history to lead the league in scoring and assists. Smith is currently averaging 21.0 points and 5.6 assists per game. He is one of four players in the NCAA averaging over 20.0 points and 5.0 assists per game

Mason Plumlee has raised his rebound average an ACC-best 5.7 rebounds per game from a year ago. He ranks fourth in the ACC in rebounding at 8.8 rpg. and has grabbed 10 or more rebounds in eight of nine ACC contests.

Kyle Singler has scored in double figures in an ACC-best 21 straight games. Singler has scored 10 or more points in 117 of his 134 career games. He has reached double figures in 53 of 57 ACC regular season games. Singler is 35 points shy of 1,000 career points in ACC regular season play. l Duke leads the NCAA with a +20.0 points per game scoring margin. The Blue Devils have won 11 games by 20 or more points this season, including six wins by 30+ points.