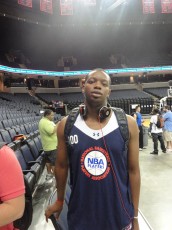 In one of the best finishes in Top 100 camp history, Gary Harris converted a tough chance inside the lane lifting the Grizzlies to an 82-81 victory in the title game of the NBPA Top 100 Camp, but not before a three-point attempt by Yogi Ferrell glanced off the rim to preserve the Grizzlies’ win. Adam Woodbury was a monster inside the paint finishing with a game high 20 points and capturing the camp’s Most Valuable Player award along the way. Harris would add 17 in the victory and Anthony Bennett finished with 12. Ferrell led the way for the Magic with 16 points and Nerlens Noel added 15 in an outstanding effort. Andrew White added 11 markers and Denzel Valentine finished with 10.