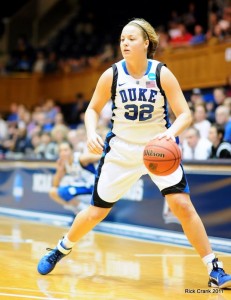 The USA Women won Gold today in Kazan, Russia at the World University Games with a 90-71 victory over host Russia in the Championship Game. Duke guard Tricia Liston averaged 8.2 points per game in 13.7 minutes of action, during the tournament. She made 42.9 percent (9-21) of her 3 point field goal attempts and was a perfect eight for eight from the free throw line.

The toughest game for the United States was a 79-78 victory over Australia in the semi-finals. Australia stormed out to a large 1st quarter lead before the United States battled back with tenacious defense to build a 17 point lead. However, Australia wasn’t finished as they mounted a furious comeback and took the lead with less than a minute to play in the game. Crystal Bradford (Central Michigan University) scored the decisive basket with 14 seconds remaining in the game.

The quarterfinals saw the USA defeat Sweden 103-72. Liston scored 11 points in the victory.