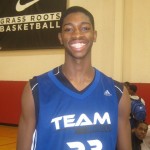 Huge effort from Amile Jefferson tonight, whom Duke coach Mike Krzyzewski called a beast in his post game presser. Jefferson grabbed 15 boards, with three of them coming during a key stretch. One where he bounded the ball out to Sulaimon for a three and then two consecutive as UVA was trying to tie the game. Jefferson also scored 10 points for a double-double on the night. Check out what Jefferson had to say to Blue Devil Nation post game -