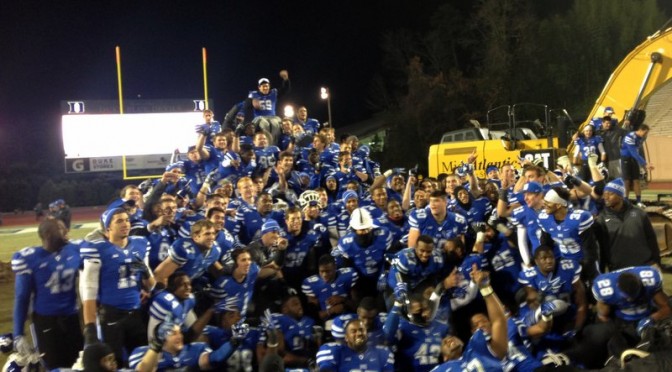 I'm personally excited that it is finally bowl week and look forward to watching Duke take on a tough 15th ranked  Arizona State Wildcats team on Saturday.  I want to also wish all of the Blue Devil Nation Happy Holidays and a Merry Christmas and hope all of you can spend time with loved ones.  Please consider saving me the leftovers this holiday season and with that said here is an abbreviated version of Monday Musings to get the week started.

Plenty to Play For

The Duke Blue Devils football team takes on the Arizona State Sun Devils this coming Saturday in the Sun Bowl.  The event has long been covered by CBS Sports and they provided plenty of commercials for the annual game during their NFL telecasts on Sunday.  I cannot help but to think back to watching the Sun Devils throttle Notre Dame and their coach in the post game interview.  Like Duke, Arizona State is seeking respect and he hammered home how hungry his team was.  But there is hunger on the Duke side as well and the Blue Devils desperately want a bowl win.  With a win, Duke would likely once again place in the final top 25 at the end of the season.  It'll be a tall order for the underdog David Cutliffe led Blue Devils and it will be a fun game to watch unfold.  Kickoff is at 2:00 and look for our preview coming later this week.  Blue Devil Nation will take in the game as well where Patrick Cacchio will be their live for all the happenings.

One could not help but notice when walking to a Duke Men's Basketball game the changes occurring at Wallace Wade Stadium.  The field is indeed being lowered and the crews are working around the clock to makes sure the first phase stays on schedule.  There are many fans who waited a good long time for a facelift to happen.  While I miss walking or running around the track already thinking back on Duke Football ghosts past, I look more forward to new memories.  The football program has plenty of momentum and the dedication needed from the Duke Administration to compete at a high level now.  The future looks bright for Cutcliffe and his program and it's good to know that the coach has found his home.

A Dose of Reality

In the last two wins over Elon and UConn, the Blue Devils at times looked vulnerable.  Coach Mike Krzyzewski pointed to this post Elon win and provided a myriad of possible reasons.  Duke is flying high right now at 10-0 but the coming ACC slate is a beast this season.  With the way this team started the season, they looked as if they were at the top of their game.  But there are plenty of more lessons to be learned from a group which starts three freshman.  Those lessons will become more clear to us as the games come more frequently on the schedule past the final holiday break.  For the record, most of the team has gone home to their families, so it's a good thing Duke has two non conference games to shake off the rust upon their return.

The always nice Holiday Invitational kicks off this coming Friday in Raleigh where Duke prospects Brandon Ingram, Dennis Smith Jr. take center stage.  Unfortunately, the Duke Bowl game takes place the same Saturday.  Duke takes on Toledo at home on the final day of the event and the women's team takes on UConn the same evening.  That schedule makes it tough on local Duke fans who want to watch possible future hoopsters compete.