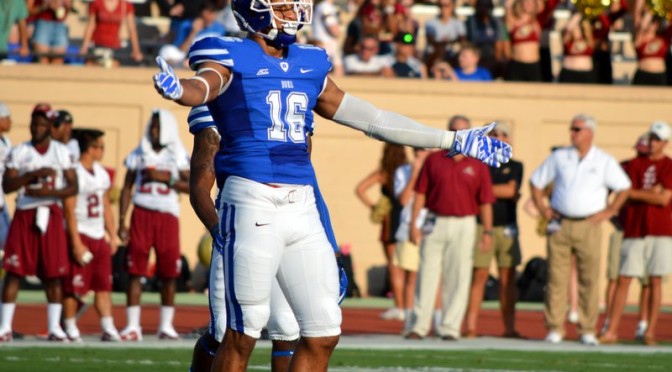 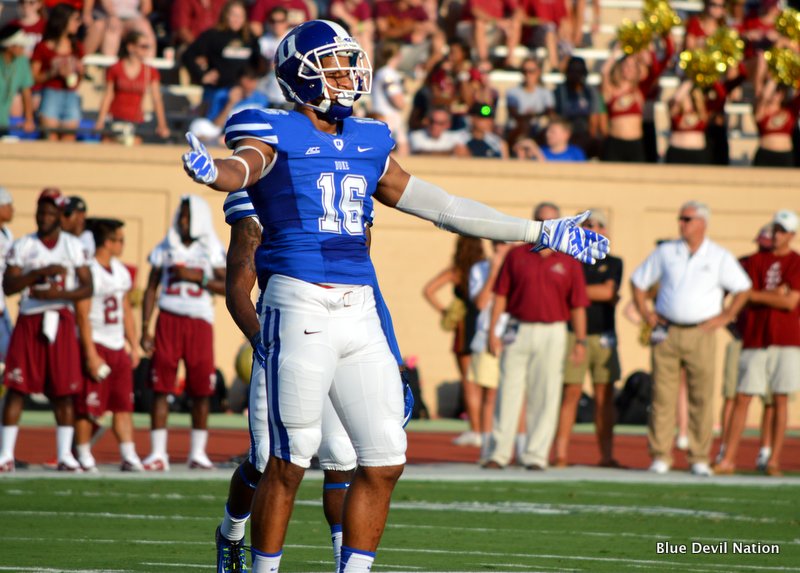 It is a football axiom that defense wins championships so it is reassuring to know when the Duke Blue Devils take the field in 2015 the secondary will arguably be the best in the nation. All five starters plus the top reserves return from 2014, which represents a huge first step toward fielding a championship quality defense.

Coached by Derek Jones (cornerbacks) and Matt Guerrieri (safeties), and going by the moniker the Cheetahs, the secondary will be anchored by senior team captain and All American safety Jeremy Cash and feature redshirt junior All ACC safety Devon Edwards.

Defensive Coordinator Jim Knowles employs the 4-2-5 defense to utilize speed to counter the ubiquitous spread offense. The 4-2-5 is especially adept at defending the run sideline to sideline. Having an extra safety on the field provides Coach Knowles flexibility in assigning run/pass defensive responsibilities.

Let's take a look at the 2 Deep Rotation:

Jeremy Cash (27 games/27 starts/232 tackles/6 interceptions) - is the starting Strike safety. Strike is a hybrid defensive back/linebacker position in the 4-2-5 defense. Cash is a redshirt senior and unquestionable Duke's most valuable defensive player. He can do it all and do it all well - cover receivers, defend the run, rush the quarterback.

Deondre Singleton (25 games/22 starts/133 tackles/1 interception) - is the starting Bandit safety. Utilizing conventional terminology, Bandit is the strong safety position. Singleton is a junior who is exceptional in a run support role and as a cover safety.

Devon Edwards (27 games/20 starts/197 tackles/4 interceptions) - is the starting Rover safety. Using conventional terminology, Rover is the free safety position. Edwards is a redshirt junior and a playmaker. Whether it is as a member of the defensive backfield or on special teams, Edwards is explosive when he gets the ball in his hands.

Bryon Fields (27 games/14 starts/112 tackles/1 interception) - is a starting cornerback. Fields is a junior who has been a solid performer to date. His production is expected to increase due to increased experience and the continued development of positional skill sets.

Breon Borders (27 games/13 starts/65 tackles/7 interceptions) - is a starting cornerback. Borders is a junior who has excelled during his first two seasons. His seven career interceptions are the most on the team. Opposing quarterbacks think twice before throwing in Borders' direction.

Corbin McCarthy (28 games/4 starts/46 tackles) - is the top reserve at Strike safety. McCarthy is a redshirt junior who plays strong, with a reckless abandon. Unfortunately, his style of play resulted in some injuries early in his career at Duke. McCarthy maintained his health in 2014 playing in all 13 games.

Evrett Edwards (12 games/20 tackles/1 interception) - is the top reserve at Bandit safety. Edwards is a redshirt sophomore who saw significant action in 2014. Edwards can also play cornerback so he provides additional flexibility to the defensive backfield.

Zach Muniz (12 games/7 tackles) - is a second string cornerback. Muniz is a sophomore who played 140 snaps as a true freshman.

Alonzo Saxton II (8 games/12 tackles) - is a second string cornerback. Saxton II is a sophomore who played 124 snaps as a true freshman, but was limited with a shoulder injury down the stretch in 2014.

Phillip Carter (8 games/2 tackles) - is the top reserve at Rover safety. Carter is a redshirt sophomore who has seen limited action so far in his Duke career.

Improvements on defense have taken place across the board over the past several seasons, with none more important than open field tackling. Duke's defensive backfield has excelled in both pass coverage and run defense with significantly improved open field tackling skills being a huge part of the success.

Expectations for 2015 include seeing the cornerbacks and safeties lead the defense in taking another developmental step forward, with the "keep everything in front of you bend but do not break" approach becoming firmer and harder to beat. This season the Duke Blue Devils defense will bend a little less, while still not breaking.