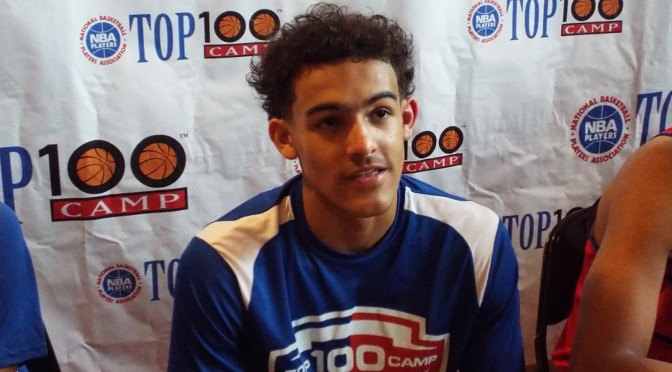 Could there be another package deal in the works for Duke Basketball?  Mokan Elite features two of the nation's top rising juniors in Trae Young and  Michael Porter.  The duo combined for a sweet play where Young hit Porter for the winning basket late in the game during the Nike EYBL Peach Jam Finals last evening.

You don't have to have a long memory to remember Tyus Jones and Jahlil Okafor, a package deal that helped lead Duke to a National title.  While the Blue Devils are not necessarily always going to go the package deal route, the aforementioned duo is a another intriguing high-low combo they are certainly keen on.  In fact, Duke Head Coach Mike Kryzewski and his assistant Jon Scheyer took in every minute of the Mokan Elite duo last night.  And they were later joined by Jeff Capel, putting three-fourths of the Duke staff in attendance.

I caught up to Michael Porter after his game winning play and asked him if his chemistry with Trae Young was the reason for the win.   "Yeah, our chemistry came quick,  Most point guards won't see that pass when they are triple teamed, but he found me," said Porter.

"I could believe they left him open, so I made the play,' said Young.

The duo has only played together for a year but it is clear they have a budding relationship on and off the court.  "Seeing the chemistry and how we play together now, I feel it's something that will take us to the next level.   So, yeah we want to play together if it works out, said Porter.

Duke, Virginia, Washington, Syracuse, Baylor, Louisville, Arizona and Kentucky have all reached out to Parker.  And most of the schools on that list have interest in Young as well.

"It speaks volumes that they came to see me play," stated Porter when asked what he thought of the Duke staff that had gathered for his game.  The Blue Devil staff certainly stands out among the throng of coaches with their recent title fresh in prospects memory.

"We've only been playing together since this summer but we're building a relationship.  it's a ways off but we feel we can take that to the next level and win national championships," said Young when asked of the rising junior duo's bond.

Duke recently offered Young on his unofficial visit.  "I just visited Duke and Coach K offered me a scholarship.  They don't offer very many kids, so it's a blessing.

I liked hanging out with the coaches.  We walked around and visited Cameron and then went to his office to talk about it all.  It was a lot of fun," said Young of his visit.

The two young, but talented prospects are likely to experience some growing pains while playing against older players as the EYBL Final progress.  But make no mistake, that this duo is starting to serve notice that they have work to do and the focus to get it done.